President Abdo Benítez Partners with FBI against Own Party 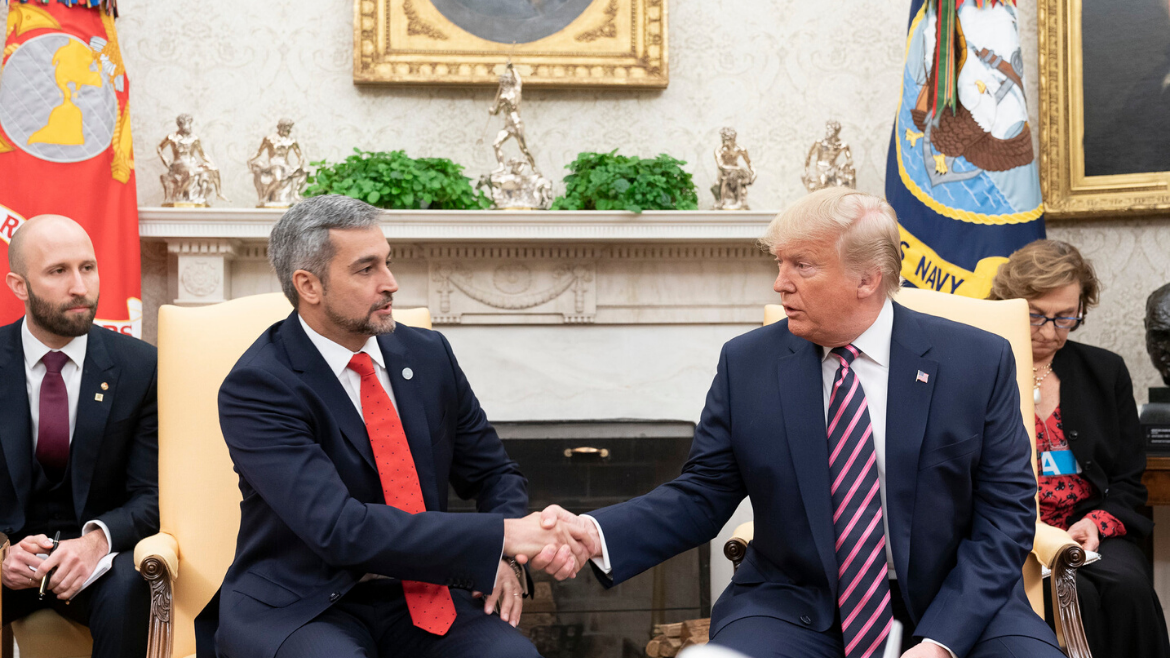 The Trump administration, through the Department of Justice and the FBI, has recently strengthened ties with Paraguayan President Mario Abdo Benítez.

In December 2019, the Paraguayan government announced the FBI would set up a team to work with local police, prosecutors, and intelligence officials. The collaboration involves the exchange of information and work on issues of interest to both countries, in particular government corruption, money laundering, and drug trafficking.

The Trump administration, through the Department of Justice and the FBI, has recently strengthened ties with Paraguayan President Mario Abdo Benítez.

In power since August 2018, Abdo is a businessman from the Colorado Party, the largest and one of the oldest Paraguayan traditional parties. Conservative on socioeconomic issues, the party has traditionally been a US ally.

Abdo carries historical baggage: his father was the private secretary of Paraguay’s last military dictator, Alfredo Stroessner (1954-1989), also a Colorado Party leader. The latest poll from August 2019, one year into office, shows Abdo’s approval rate at 30 percent amid a year of economic stagnation.

To understand Abdo’s strategic alliance with President Donald Trump, one must factor in his predecessor, Horacio Cartes (2013-2018). Although from the same party and ideologically similar, Cartes—one of the country’s richest and most powerful businessmen—is currently Abdo’s major opponent.

Cartes’ hand-picked successor lost to Abdo in the 2017 Colorado Party primaries, and Cartes has been a staunch critic since. Cartes is a relative newcomer to politics—his first elected post was president—but his movement controls the majority of the 80-seat Chamber of Deputies.

In late July, Cartes and his legislators almost approved an impeachment trial of Abdo over a diplomatic scandal with Brazil. Abdo retaliated by backing the prosecution of key Cartes allies, including former senators and a close Jewish friend, Darío Messer, a financier sought in Brazil for his role in the Petrobras money-laundering scandal. Cartes has also been indicted by Brazilian authorities for allegedly helping Messer launder money in Paraguay during his presidency.

Brazilian police arrested Messer in Sao Paulo in the midst of the July diplomatic scandal that almost got Abdo impeached, which suggests coordination with Brazilian President Jair Bolsonaro. Messer’s relatives, also under arrest, have negotiated a plea bargain in exchange for information on how the money was laundered in Paraguay, which could end up ensnaring Cartes, who owns a bank and manufactures cigarettes that are smuggled out of the country.

As with Brazil’s indictment and extradition attempt of Cartes, the collaboration of Abdo’s administration with the FBI is perceived in Paraguay as a move to increase his popularity and target political opponents.

Are things so bad in Paraguay that outside intervention is needed?

Paraguay is among the world’s most corrupt nations. It ranks 130 out of 180 countries in Transparency International’s Corruption Perception Index. Justice is slow, sentences go to the highest bidder, and impunity is widespread.

According to Latinobarómetro, a long-running regional survey, 87 percent of Paraguayans believe the government has been coopted by interest groups; over 90 percent believe corruption has remained the same or worsened; over 60 percent believe all or most judges and police officers are corrupt; and over 70 percent have little trust in the justice system.

While the Paraguayan government has been cooperative with anti-terrorism efforts, challenges remain from “ineffective immigration, customs, and law enforcement controls along its porous borders, particularly the Tri-Border Area (TBA) with Argentina and Brazil, and its dry border with Brazil from the TBA to Pedro Juan Caballero,” according to the Department of Justice’s 2019 international report on terrorism.

Widespread corruption within law-enforcement and judicial institutions, as well as a lack of interagency cooperation, make apprehension and prosecution difficult.

Paraguay is a big player in Latin America’s narcotics. It is the largest supplier of illegal marijuana in the region, second only to Mexico, and a transit country for other drugs.

“Traffickers exploit the country’s porous borders, clandestine airstrips, lack of airspace control, extensive internal waterways, and under-resourced law enforcement and judicial officials to transit cocaine, mainly to Brazil or through Brazil to overseas markets, though rarely the United States,” according to the Department of State’s 2019 International Narcotics Control Strategy Report.

The US government classifies Paraguay as a “major money-laundering country,” defined as one “whose financial institutions engage in currency transactions involving significant amounts of proceeds from international narcotics trafficking.” Most Latin-American countries—including Mexico, Brazil, and Argentina—are also classified as such.

Money laundering is widespread in both the formal and informal economies.

“Unregistered exchange houses; a primarily cash-based economy in the TBA and along the border; the use of false or borrowed names to register businesses and property titles; lax regulation of import-export businesses and casinos; weak border controls; corrupt, overwhelmed, or untrained government agents; and insufficient oversight of a high volume of money transfers to Lebanon and China,” exacerbate the problem, the report says.

What is the State Department’s role and the structure of the FBI/DOJ participation?

The Paraguayan government has not revealed many details. It just announced the FBI would set up a local team to work with local police, prosecutors, and intelligence officials. The US ambassador has said the FBI will not have a local office but will rather send agents as needed. Nevertheless, cooperation with the DOJ/FBI is not new.

The DOJ has held training sessions for Paraguayan officials before, always with the aid of the State Department. In August, the Office of Overseas Prosecutorial Development Assistance and Training (OPDAT) offered a workshop on gun smuggling for judges, prosecutors, and customs agents near the border with Brazil.

The OPDAT for the Western Hemisphere is a DOJ program funded by the State Department, with offices across Latin America, including Paraguay.

OPDAT aims to “provide capacity building and technical assistance to foreign prosecutors, judges, and investigators throughout Latin America and the Caribbean, most often through the deployment of experienced Resident Legal Advisors (RLAs)… the work in the region places a large emphasis on helping countries transition to the accusatory system and providing case-based mentoring in relation to complex investigations involving transnational criminal organizations.”

Tri-Border Area Counter-Terrorism Program: an RLA has been in Argentina since 2017 to support counter-terrorism efforts in and among Argentina, Brazil, and Paraguay. The official helps TBA governments identify and make cases against terrorist organizations and helps freeze assets related to terrorist financing.

Isn’t this inviting a backlash? Do Paraguayans think the FBI is necessary?

Paraguayans have mostly welcomed the FBI’s help. They sense corruption is so entrenched that only outside actors can bring about meaningful change.

Notably, however, the most prominent progressive party in Paraguay opposes the FBI taskforce. The concerns are sovereignty and a lack of transparency regarding the foreign entity’s role in assisting with investigations.

What safeguards do the Paraguayans have to assure professionalism?

Paraguay’s interior minister claims the cooperation will deal only with intelligence and security issues and that foreign officials have no legal authority over local judges and prosecutors. No treaty or legal changes are up for consideration at this point.

The Trump and Abdo administrations issued a joint statement following the White House visit, emphasizing “Paraguay’s need for assistance in reforming its police and penitentiary systems.”

Which crimes will they target? What successes does the United States have to refer back to?

The Paraguayan government has said the collaboration involves the exchange of information and work on issues of interest to both countries, in particular government corruption, money laundering, and drug trafficking.

The DOJ has thanked Paraguay for extraditing several fugitives in the past two years, such as an alleged terrorist financier and for designating ISIS, al-Qaida, Hamas, and Hezbollah as terrorist organizations in August 2019.

January 20, 2020
Previous
How Wealth Management Is Reshaping Latin America
Next
Peter Thiel’s Recipe for Entrepreneurship
You might also like
One of the following
April 14, 2022