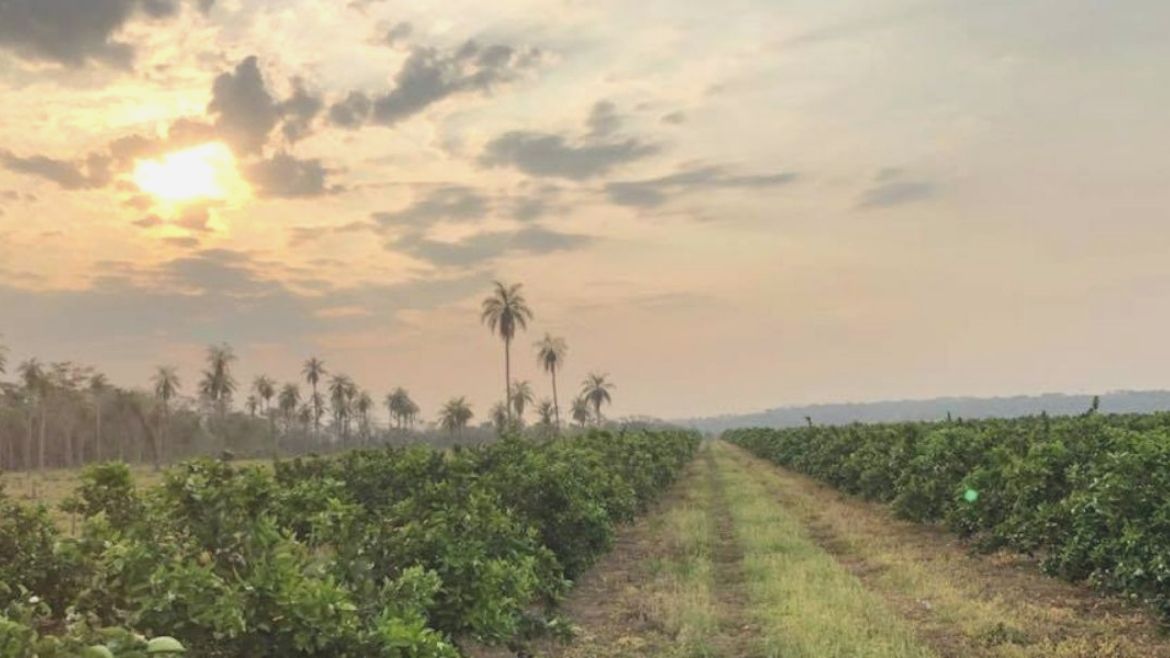 On Sunday, February 3, a group of Canadians, Japanese, Chinese, and Filipino Americans boarded a minibus in the capital city of Paraguay for a two-hour trip. The seven individuals were headed to see plots of land they had either already purchased or were thinking of buying in rural La Colmena, population 5,234. Investing in a country they had never been to before, thousands of miles away from home, didn’t seem to daunt them.

Paraguay Ag Invest, a partner of the Germany-based AgriTerra Group, organized the trip. It is part of their push to attract North Americans after having focused on European investors. In Paraguay, the firm offers opportunities in orange plantations, vegetable greenhouses, and livestock. David Smith, an American sales representative who lives in Panama, invited me to join them for the tour of open-field orange plantations. Investors in this crop buy a parcel of land tied to a long-term management contract with AgriTerra, which promises a yield by selling the produce on the local market.

In the aftermath of the Great Recession, a prolonged policy of historically low and even negative interest rates in much of the developed world sent investors looking for better yields elsewhere.

Emerging markets in Latin America welcomed inflowing capital. Even though that trend has reversed course marginally as the United States and other developed economies have recovered, some investors have remained wary. In January, both the Federal Reserve and the European Central Bank kept rates steady amid growing market uncertainty.

Mired in recession or political instability, many Latin American economies have not been in good shape to attract investors over the last decade. There is, however, a country that has remained mostly stable, even during the commodities crunch that hit the region hard: Paraguay.

According to the World Bank, the Paraguayan economy grew at 4.5 percent per year on average between 2004 and 2017 and is poised to continue growing at a 4 percent rate until 2021. Unlike neighbors, inflation has never been a major concern. Total poverty since 2003 has virtually halved.

For economist and business consultant Amilcar Ferreira, Paraguay’s economy is “slow but steady.” He told Econ Americas that it has managed to thrive thanks to a broad consensus among policymakers on fiscal responsibility since 2003, when the country risked slipping into default.

A tax reform in the following years and a 2013 legislation that placed a ceiling on government spending kept the finances in order and cemented the country’s reputation for stability. “This bet on prudent macroeconomics is bearing fruit,” Ferreira said, citing the endless appetite for Paraguayan sovereign bonds in international markets as a sign that capital will keep flowing in.

One investor, a middle-aged man from California, echoed this sentiment in similar terms when asked why he chose Paraguay. “Stable currency, conservative government, and productive land,” he told me. Another man from Nova Scotia, Canada, was familiar with the project from a similar investment in Panama. One major selling point for him was that it was uncorrelated with stock-market volatility.

However, as Ferreira cautioned, several challenges remain. In general, institutional weaknesses such as government waste and an unreliable legal system undermine foreign investment. For agribusiness in particular, the notoriously disorganized land registries and insufficient public-health measures to control diseases are low points.

Midway, we made a brief roadside stop in Nueva Italia, where the firm will set up greenhouses imported from neighboring Brazil. Vegetables will be the focus here, but citrus crops such as lemons and tangerines will also grow inside the greenhouses, which offer faster harvest times than open-field plantations.

Carsten Pfau, the German immigrant who has lived in Paraguay for over 25 years and heads the local branch of AgriTerra, joined us in La Colmena’s main square around noon. Many streets featured the names of Japanese immigrants who founded the small town in 1936. He then led us to the plantation in a black pickup truck almost the size of the bus we were in.

Right from the entrance, saplings covered both sides of the road—85,000 on the entire property, said Smith. Several species were planted to ensure harvest the year round. This also means the plantation employs fixed workers “who are paid on time,” commented Pfau once we got off the bus to inspect a larger set of trees, almost two years old and already sold out to German investors.

The soil was dry; it had not rained in a full month, the onsite farmer told me, so he was thankful when a storm soon broke out and poured on the trees for a solid hour.

We did not see any ripe fruits since it takes at least three years for oranges to be ready for harvest. Pfau claimed that Paraguay imports around 85 percent of oranges from Brazil and Argentina, so there is local demand. Further, AgriTerra has secured deals with local distributors and processing plants to buy up all the produce, he assured.

Smith mentioned that the firm has plans to build an orange-processing plant, but to make it viable at least 2,000 hectares (4,942 acres) of crops are needed. So far they have secured 800.

Luis González Segnana, a professor of agricultural sciences at the University of Asunción and an expert on citrus crops, told Econ Americas that there is indeed not enough local production and most oranges are imported.

He assured, however, that plagues such as HLB or greening disease, which has no cure, pose a major challenge to citrus crops. In 2013, the government agency that oversees seed quality declared a national emergency and destroyed 70,000 trees to try to contain its spread. Even though the disease has not been detected in La Colmena, farmers in four neighbouring regions—Cordillera, Guairá, Caaguazú, and Caazapá—still struggle with it to this day.

No News Is Good News?

Several investors and David Smith noted that one never hears about Paraguay in the news, which they argued is a good thing. To the extent that this signals stability, it is true.

However, for Paraguayans, politics is a wild ride of corruption scandals and disappointments. Just to name a few instances: in 2012 the sitting president was ousted through a dubious procedure; in 2017 protesters burned the Congress down to protest an attempt to illegally change the Constitution to allow for reelections; and there is an active guerrilla group. While much smaller than the Colombian ELN, the Paraguayan People’s Army has kidnapped and murdered several Paraguayans and foreigners over the past decade.

A lack of media coverage can also mean that serious issues are not getting enough attention, such as the rampant deforestation, mainly for cattle farming, that is wiping out wildlife in the Chaco region.

Compared with their neighbours, however, Paraguayans might do well to count their blessings.

Author’s update, April 11, 2019: It has come to my attention that AgriTerra KG, the parent company of Paraguay Ag Invest, has been banned by Germany’s financial authority from offering this investment to the public in Germany because the prospectus did not meet legal requirements. A representative from BaFin confirmed to Econ Americas that the prohibition is still in place. The legal impediment does not apply to offerings outside Germany.

February 2, 2019
Previous
Why Canadians Are Suffering a Bankruptcy Spike
Next
Cities Must Eat Humble Pie, Recognize Cyber Vulnerability
You might also like
One of the following
April 14, 2022