Brazil: Will the Wall Hold between Military and Politics? 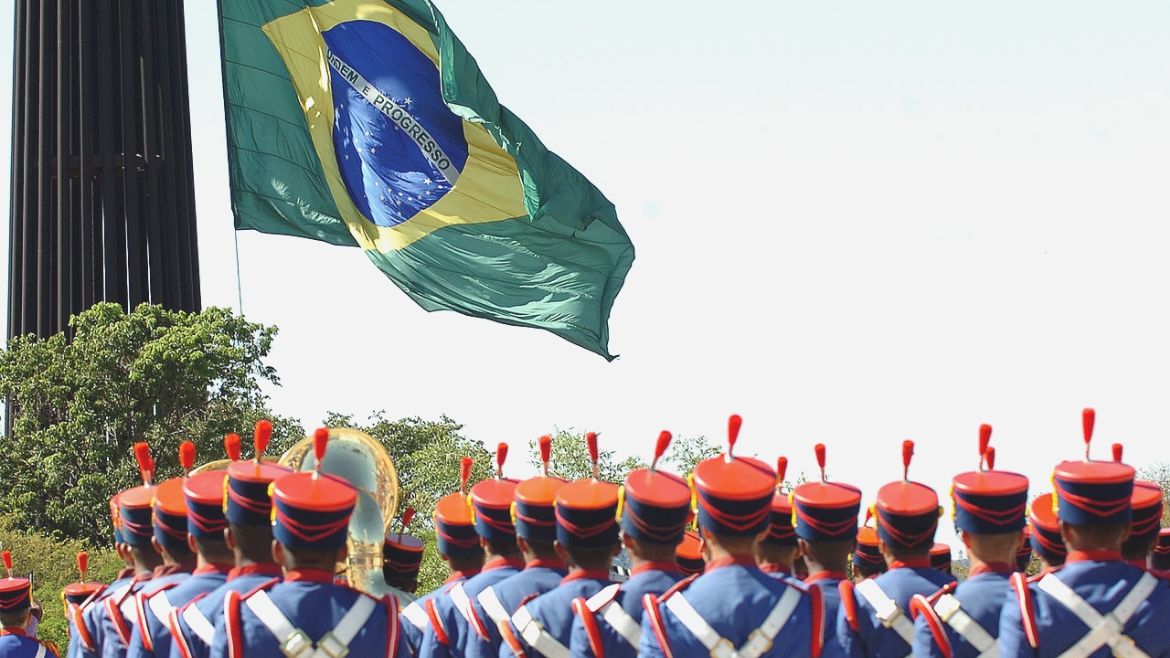 Brazil: Will the Wall Hold between Military and Politics?

The election of retired army captain Jair Bolsonaro as president of Brazil signals a return of the military to politics, only rivaled in history by the country’s 1964-1985 dictatorship and in today’s Venezuela. Not only was his running mate a general, 1,634 other candidates for executive and legislative positions at the federal and state level had a military background; 104 got elected, up from 10 in 2014.

In the region, Brazil is an outlier in how the military remain involved in public affairs and refuse to confront their dark past. Brazil’s armed forces are the most powerful in the Americas after the United States, enjoying popular prestige. There are military police units, mandatory conscription, and a 40-year-old amnesty law that still protects from prosecution officers accused of human-rights violations.

In many cases, these amnesty laws were repealed thanks to left-wing movements and charismatic leaders backing them: José Mujica in Uruguay (2010-2015) and Cristina Kirchner in Argentina (2007-2015). Brazil’s two-term President Lula da Silva (2003-2011) of the Workers’ Party, whom Barack Obama once called “the most popular politician on Earth,” however, failed to enact a similar transformation.

“Argentina and Brazil: Contrasting the Impacts of Populism and Social
Democracy on Military Institutions,” a fascinating paper presented at the World Congress of the International Political Science Association on July 21-25, 2018, aims to account for Brazil’s uniqueness with a comparison to neighbor Argentina.

Authors Carlos Waisman, a comparative political sociologist at the University of California San Diego, and Daniel Zirker, a political science professor at the University of Waikato, New Zealand, maintain that the different kind of leftist regimes in both countries can help explain the institutional independence or subordination of the military.

Argentina and Brazil: Populists and Social-Democrats

Instead of a coup, embattled Brazilian military rulers in the early 1980s negotiated with the opposition to allow for a democratic transition that culminated in open elections and the 1988 Constitution. Old regime leaders stuck around rather than going to prison as in other countries.

Only after 23 years was a full-fledged truth commission established under President Dilma Rousseff (2011-2016), Lula’s hand-picked successor. After digging into the past, its final report identified 377 officials—191 of them alive—involved in human-rights violations between 1946 and 1988 and called for their prosecution. However, the commission had no punitive authority and its recommendations mostly remained as such.

The Brazilian government had apologized for dictatorship-era crimes in 1995, but the armed forces have never issued a similar statement, and they refuse to declassify archives on internal repression. In 2014, the military officially admitted to tortures and political killings to the truth commission, but that they were justified in the name of counterinsurgency.

In contrast, Argentina, despite some back and forth to appease the military, repealed laws limiting the prosecution of junta leaders in 2003. Its Supreme Court ruled them unconstitutional in 2005.

“Hundreds of officers accused of human-rights violations were prosecuted, and programs of financial compensation for victims were expanded. At the end of Cristina’s administration, over 1,500 individuals, mostly officers and former officers, had been either sentenced to prison terms or in jail and awaiting trial,” write Waisman and Zirker.

The differences lie in the magnitude of the dictatorship-era repression, the military’s economic and warfare performance, and the ruling party’s ideology. In Argentina, the figure of those dead or disappeared victims during the last military dictatorship (1976-1983) run into the tens of thousands (not without controversy).

“While a large proportion of the Brazilian population has regarded the military’s policies as successful in terms of promoting the country’s development, the consensus of the Argentines was that the regime had blundered: its economic legacy was de-industrialization, stagnation, three-digit inflation rates, and an unsustainable foreign debt.”

Another “major blow to the Argentine military’s prestige as a professional force and to their image” was the quick and brutal defeat in the 1982 Falklands War.

Also, the administrations of the Peronist couple who ruled Argentina from 2003 to 2015 embodied a more populist strand than the social-democrat variety of the Workers’ Party in Brazil.

Both regimes “expanded the welfare state and aimed at incorporating the poor into politics,” but for Néstor and Cristina Kirchner’s populism, according to the paper, “the executive is the primary representative of popular sovereignty, and Congress and the judiciary should legitimate executive policies, i.e. should be subordinate to the executive.”

In Brazil, the Workers’ Party more often than not stood for republican democracy and the separation of powers. Congress could hardly have impeached Dilma Rousseff in 2016 and the Supreme Court confirmed Lula’s corruption sentence if that were not the case.

“The economic policies of the two regimes, beyond similarities in their understanding of the welfare state and some of their international alignments, were quite different: Brazil under the [Workers’ Party] exemplified a Latin-American version of social-democracy, and it sought, unlike Argentina, to strengthen the engagement of the country with the world economy,” Waisman and Zinker observe.

These ideological and historical ingredients meant that, despite Rousseff being a former guerrilla who was tortured in jail, the Brazilian executive had little choice but to tolerate the military establishment.

“Military policy under Lula and Dilma was decidedly more reactionary—they largely ignored the military and military prerogatives where and when possible and attempted to counter military opposition to their social-democratic project with the formation of special police forces. No real effort was made to incorporate the military into the social democratic project.”

In the Kirchners’ Argentina, on the other hand, autonomous institutions were seen as a threat. “The strengthening of military subordination to the executive entailed not only the elimination of resistance to the revision of the past and the punishment of perpetrators of crimes,” military promotions and appointments sought to politicize and secure loyalty to the populist project.

Waisman and Zirker argue that the Kirchners carried out “the most extensive purge since the re-establishment of democracy in 1983. The pattern of loyalty trumping qualifications remained throughout the Kirchners’ administrations.”

Austerity and budget cuts despite a commodity boom became tools to neutralize the military’s threat factor. The authors note that “the military budget, which represented 1.1 percent of the GDP in 2003, remained at 1.2 percent in 2015, one of the lowest in South America. As a share of government outlays, military expenditures declined from 4.3 percent in 2003 to 2.4 percent in 2015… In spite of the increases in the military budget, the armed forces at the end of the Kirchner years could appropriately be described as destitute: very low salaries, lack of funds for even elementary maintenance, and unavailability of resources for basic procurement.”

It is too early to tell, but there are striking parallels between Bolsonaro and the Kirchners in at least two ways: a focus on the president as the nation’s spiritual leader and the attempt to assimilate the military. His transition team has more military officers than economists, and he has already pledged to give them an outsized role in his future cabinet. Also, Bolsonaro’s brand of conservatism is more close to populism than to republicanism.

In Brazil, weak governments usually resort to the army to boost confidence in times of hardships. In February, sitting President Michel Temer—who has single-digit approval ratings—appointed a military officer to head the Defense Ministry for the first time in 19 years and called in the army to occupy Rio de Janeiro’s famed favelas riddled with drug cartels.

Crime is rampant, and the economy will continue to remain stagnant until at least 2020. Bolsonaro’s party is small, provides no line-up of experts to fill his cabinet, and hasn’t elected enough legislators to secure approval for the executive’s projects. The military—who have their own higher-ed institutions and run competitive firms—are poised to provide him with that managerial class consistent with his outsider brand and repudiation of traditional political parties.

However, active career officers have caught on and are trying to distance themselves before Bolsonaro is sworn in on January 1.

In a recent interview with the local daily Folha de São Paulo, General Villas Bôas, commandant of the Brazilian army, said “We’re being very careful with this interpretation that his election is a return of the military to power. It’s absolutely not. Some military officers were elected, some are on his team, but there is an institutional separation. We’re working to drive that point home because we want to prevent politics from entering the barracks again.”

Villas Bôas is leaving the post soon, and who Bolsonaro will replace him with is still unknown, but retired officers such as Vice President-elect General Mourão are a far cry from similar statements of moderation. In a country where one in three support a military intervention to fix politics, there is ample cause for concern as to how long this wall of institutional separation will hold, especially in future crises with the still strong Workers’ Party that has vowed to mount a fierce opposition. As history has shown, populist leaders are apt at tearing them down.

Previous
Crowdfunding Democratizes Finance, and That’s Okay
Next
San Francisco’s War on Airbnb Is a War on the Free Market

November 13, 2018
Previous
Crowdfunding Democratizes Finance, and That’s Okay
Next
San Francisco’s War on Airbnb Is a War on the Free Market
You might also like
One of the following
April 14, 2022