How the Divided States of America Came Apart

Charles Murray's cold demeanor has not stopped him becoming one of the most influential authors in the United States. (Gage Skidmore)

How the Divided States of America Came Apart

Attending a selective business school in the United States opens your eyes to a lot. Forget First-World problems; you become aware of what I call super-zip problems. They testify to the bubble within which many wealthy Americans live, disconnected from their compatriots.

My favorite super-zip problem is from a case study on the Yale University endowment. The chief investment officer, who brought home $4.7 million in 2017, worries about whom to put on the office’s softball team. As Jimmy McGill would say to Howard Hamlin in Better Call Saul, “you’re so relatable.” 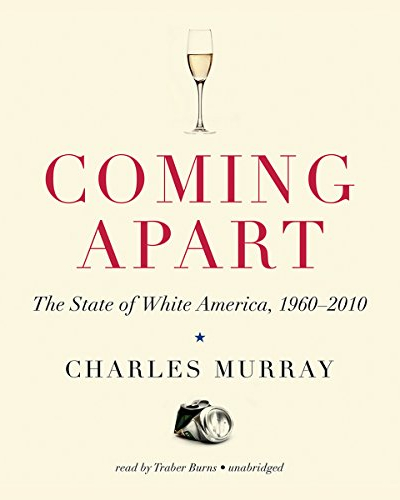 Super zip is a term from Coming Apart (418 pages, 2012) by Charles Murray, and it refers to the wealthiest and most influential postal codes in the United States. These are clustered around New York City, San Francisco, and, of course, Washington, DC. They exhibit what amounts to a different country, not just in financial terms but in values.

The contrast reminds me of a jolting experience in Neuquén, Argentina. Running was how I got to know the area, and one run inadvertently led me to a fancy gated community—which included its own stores and equestrian and golf clubs. Presumably, my whiteness explains why the heavily armed security did not stop me. Given the destitution of towns in Patagonia, the country club nestled behind the provincial legislature was an oasis, a First-World island where the elites (and corruptos) segregated themselves away.

The parallel divergence of “core behaviors and values” in the United States is the theme of Murray’s historic work. Subtitled The State of White America, 1960–2010, the book is data-rich, so much so that I read it twice to glean its full worth.

Aside from care, detail, and precision from Murray, the book stands out for its lucidity. Murray makes no bones about politically incorrect and, at times, icky realities of the United States. For example, Coming Apart focuses a magnifying glass on the decline of marriage and the rise of illegitimate births in the US underclass. That is in contrast to the super-zip world where marriage and responsible parenting, at least in most regards, remain strong.

With reference to Sexual Suicide (308 pages, 1973) by the brilliant George Gilder, Murray details a lost generation of idle men who find their provider role and pride in blue-collar work supplanted by the welfare state.1 Although polemical, Gilder foresaw familial breakdown on account of changing gender dynamics, which has come to pass before our eyes and largely during my lifetime. The foundational economic framework in Murray’s family analysis—and the text for my undergraduate economics directed study—is A Treatise on the Family (304 pages, 1981) by the late Nobel laureate Gary Becker.2

Tidbits you are unlikely to hear elsewhere, at least not with such clarity and data, include the findings:

Murray distills many trends into what he characterizes as the loss of a coherent US culture and “founding virtues.” He lists these and explains their importance in great detail: (1) industriousness, (2) honesty, (3) marriage, and (4) religiosity.

To show how these have come apart along socioeconomic lines, Coming Apart explores the examples of Belmont, Massachusetts, and Fishtown, Pennsylvania. The former, a suburb of Boston, represents a super zip and the latter, a suburb of Philadelphia, represents a working-class town—although he does narrow the numbers to make the analysis cleaner.

Their tales show the process towards an increasingly class-based and divergent society. For example, Murray finds religious participation is strongly associated with happiness in life and many other favorable outcomes. To my surprise, such participation has declined more markedly in Fishtown. Belmont demonstrates higher religiosity and civic engagement in many spheres.

To drive the disconnectedness point home, Murray includes a survey for readers, so they can assess the extent to which they live in a bubble. Have you, for example, ever had a job that required you to sweat and come home sore? If you have never held such a job, he explains, you cannot appreciate the difficulty of manual labor, period.

Takeaways from Coming Apart will depend on the reader, although mine is an imperative to remove barriers to market entry and de-emphasize higher education. However, the weight of the evidence is so overwhelming the title appears to be a misnomer: the coming apart has already happened, and the fault lines have deepened since the book’s release in 2012.3 Murray acknowledges his findings could embolden progressives to emphasize income redistribution even more heavily than is their prevailing wont.

He leans libertarian and notes problematic wealth redistribution to the federal leviathan, consistent with most super zips being in and around Washington, DC. However, Murray believes innate intelligence explains most of the divergence, made apparent by the service-oriented and now digital economy, so he emphasizes the need to focus on the founding virtues that undergird policy and restrain the welfare state.4

Murray’s chief call then is for moral leadership from wealthy Americans. They tend to live conservative lives and almost universally shun unhealthy habits such as smoking, yet they lack moral clarity in the public domain. He challenges the sheepish approach to talking about social problems, which favors not being judgmental over being forthright. He also calls for more civic engagement from the next generation, lest the bonds be lost irreparably between social classes. Regarding never-married people, he quipped at an event promoting the book, “they’re not coaching the little leagues.”5

1. I stumbled across Sexual Suicide as an undergraduate at Boston University, and it had a profound impact on my thinking. Gilder released a revised edition, Men and Marriage (240 pages, 1986), but it is a watered-down version whose only advantage is readability. My strong recommendation is the original 1973 version.
2. For a rigorous examination of social fragmentation in the United States, particularly regarding the rise of people living alone and unmarried, see Bowling Alone: The Collapse and Revival of American Community (544 pages, 2000) by Robert Putnam.
3. If you want to see the US underclass, get on a Greyhound bus between cities, as I did many times during my years in Boston.
4. As outlined in In Our Hands: A Plan to Replace the Welfare State (152 pages, 2006), Murray’s proposal is to scrap all welfare programs entirely and replace them with a universal basic income.
5. In 2012, Murray gave a speech in Raleigh, North Carolina, for my employer, the John Locke Foundation. His capacity to speak off the cuff with authority struck me, and this is partially what motivated me to read his book. His blunt honesty rattled many in the audience, but they could see he was thoughtful and had done his homework to the extreme.

Previous
Fixed for Failure: Corruption in Nicaragua’s Energy
Next
Why Inflation Is Inevitable after Coronavirus Bailout

Fergus Hodgson
April 20, 2020
Previous
Fixed for Failure: Corruption in Nicaragua’s Energy
Next
Why Inflation Is Inevitable after Coronavirus Bailout
You might also like
One of the following
April 14, 2022