Taxi Cartels Are Like the Mafia Defending its Territory 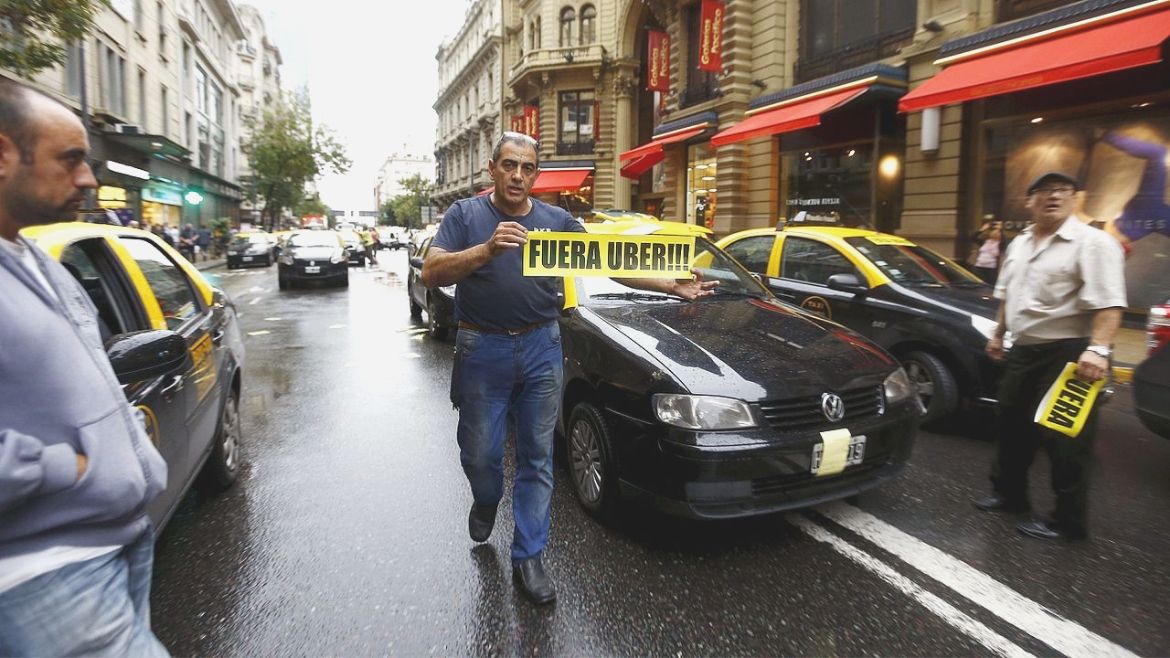 Taxi drivers block streets during a protest against Uber in Buenos Aires, Argentina, on Apr. 20, 2016. On top of protests, taxi cartels have resorted to vandalism to protect their market. (Wikimedia)

When María Carolina Roldan found her car burned and destroyed in Buenos Aires, Argentina, she lost more than her mode of transport. The single mother and struggling immigrant from Venezuela lost her means to make a living as a driver via the Cabify app.

She became another one of the thousands of victims around the world who have suffered at the hands of taxi cartels. Their mafia-like enforcers pretend to work for the common man. In reality, they represent an enriched class throwing a tantrum.

Technological disruption always dislodges incumbents, and Uber and comparable apps are no exceptions. Rather than adapt to the times and raise their performance, however, taxi unions are resorting to violence and intimidation.

Burned vehicles, robbery, extortion, kidnapping, and even murder are the tactics used by the Luddites against drivers who simply service willing customers. Had these tactics happened in any other industry, the police would have already gone after the offending mobs.

Unfortunately, there is a double standard when it comes to legalized cartels, which are state-sanctioned monopolies with political backing.

Since incorporation in 2009, the most prominent and popular ridesharing app, Uber, has faced numerous battles with regulators and taxi unions. These confrontations—for merely offering convenient and affordable transport—have gone beyond fines and warnings.

Vigilante justice has often been the verdict, while perpetrators hypocritically decry illegality. On September 26, the night Roldan lost her vehicle to sabotage, self-styled Uber “hunters” destroyed four other vehicles in Buenos Aires. The attacks were linked, with all the cars set on fire, their tires deflated, and “Uber” written on them with spray paint.

“This is the doing of taxi drivers. [They] threaten us and take photos” to monitor our whereabouts, she explained. The five victims that night were the tip of the iceberg, and Uber reports 750 similar attacks in Buenos Aires this year.

Whereas the Cabify app is legal across Argentina, since it demands that drivers get a special license and additional insurance, Uber is still in a legal gray zone. The latter, struggling against a public and private crackdown, only operates in the cities of Buenos Aires and Mendoza. Given a banking blockade, Uber clients must pay with cash or foreign credit cards, which limits the consumer base.

Nevertheless, Argentines are increasingly looking at Uber as a job opportunity, given the country’s persistent economic crisis. Some 400 drivers and 7,000 clients in Buenos Aires have joined the app during the last three months, the company claims. For 40 percent of drivers, it is their only source of income.

While rideshare drivers in Argentina contend with runaway inflation, escalating crime, and now misconstrued “justice,” their battle follows the same lines as others elsewhere.

For example, taxi associations in Quito, Ecuador, protested outside the national revenue-agency headquarters in October. Carlos Brunis, leader of the regional taxi union, demanded that officials monitor Cabify and Uber to set up regulations that ensure “fair competition.”

In Ecuador, both Cabify and Uber remain illegal, and more than 10,000 drivers received fines between January 2016 to June 2018. The revenue is so important to the app drivers’ livelihoods, however, that they keep working and just try to avoid the police.

In Halifax, Canada, there is a waiting list for taxi licenses in the hundreds, and one local taxi owner wanted to expand the cartel for more of her own drivers. However, when she found out last month that expansion might open the door to ridesharing, she had a sudden change of heart: “Uber and Lyft are not welcome here, and I can speak on behalf of the taxis and limousines in this city. We have enough to take care of the demand.”

If she were offering a better deal than rideshare apps, she would have nothing to fear.

In Pretoria, South Africa, taxi drivers got violent at a train station, and Uber competitors started to collect passengers at a nearby parking lot. That didn’t stop the classy taxi drivers, though, who threatened to burn down the stores at the alternative lot.

Coming to Grips with the Inevitable

Regulators should consider how many jobs are at stake, why these apps have won over consumers, and what makes taxi drivers resist competition. The merits of rideshare apps relative to traditional taxis are there for all to see, and they are not going away anytime soon. The apps are only growing more elaborate and sophisticated, expanding to new services, and winning over more users, while leaving their competitors in the dust.

As Cabify’s Ecuadorian representative explains, app workers are small entrepreneurs. Some even hire additional drivers for cars they own. Rideshare drivers also tend to have been struggling economically. Data collected from London and reported by the National Bureau of Economic Research finds that Uber drivers tend to come from the bottom half of the income distribution. They enjoy higher earnings and greater work autonomy and flexibility as a result.

At this point those who stand in the way of technological progress show themselves to be the Luddites of our time. Their thinly veiled pleas to be defending the worker are nothing more than rhetoric that protects spoiled cronies at the expense of workers needing a break.

The use of violence means the jig is up, and they have no argument. Might is right is all the taxi unions have.

Fergus Hodgson
October 16, 2018
Previous
Venezuelan Regime Deploys Cryptocurrency to Evade US Sanctions
Next
The Fed Needs Its Wings Clipped
You might also like
One of the following
April 14, 2022