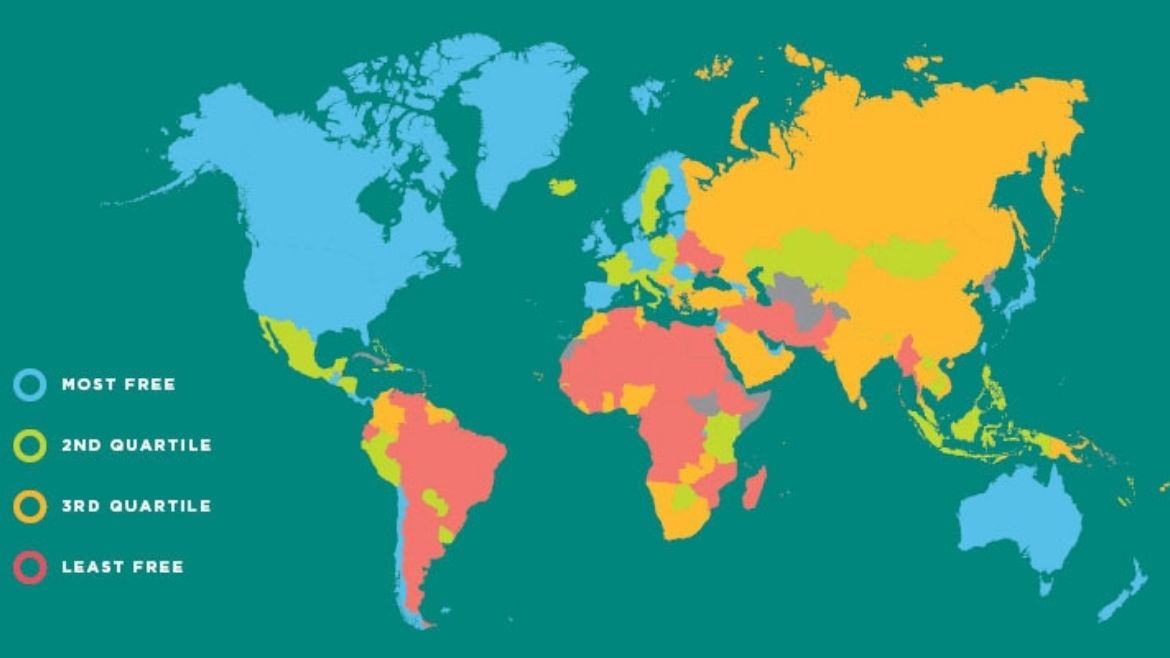 As has become customary in the index’s history, Hong Kong and Singapore remain at the top two positions. (Fraser Institute)

Latin America consolidates its reputation as the home to the world’s economic basket cases with the latest Economic Freedom of the World Index. Argentina and Venezuela ended up among the bottom three countries in the Fraser Institute’s annual report, which lays out the case for individual and economic freedom as the path to human progress.

James Gwartney, Robert Lawson, Joshua Hall, and Ryan Murphy are the authors of this year’s edition, released on September 25. The index, based on data from 2016, examines the extent to which individuals are free to make economic decisions that shape their lives. It measures the degree of 162 countries’ economic freedom by analyzing 42 indices in five areas: size of government; legal system and property rights; sound money; international trade; and regulations. Since the last edition, it has incorporated the Gender Disparity Index adjustment, a measure of women’s economic rights.

As has become customary in the index’s history, Hong Kong and Singapore remain at the top two positions. They are followed by New Zealand, Switzerland, Ireland, the United States, Georgia, Mauritius, United Kingdom, Australia, and Canada. For the first time since 2009, the United States returns to the top 10 most economically free nations. Canada also makes a comeback after falling to the 11th place last year.

Nevertheless, the report provides alarming insights on how global support for freer economies has declined since the 1990s. Chapter three of the report, Measuring Global Support for Free Markets, 1990–2014, is a related research paper written by Pál Czeglédi and Carlos Newland that outlines the Free Market Mentality Index, which seeks to capture perceptions in favor of a free economy. They found that the Great Recession has not changed a negative trend, even though it inspired the emergence of liberty-enhancing technologies such as bitcoin. Even more worryingly, younger generations appear to be more reluctant to accept free markets.

Chile, once the 10th freest economy, continues to slide but remains the regional leader at the 15th place. Costa Rica, ranked 33th, has fallen 10 places since the 2014 ranking. In contrast,  Guatemala and Panama improved significantly during the same period, rising 10 and 22 spots, respectively, to the 23rd and 27th places.

Hernán Bonilla, head of the Uruguayan Center for Development Studies, told local newspaper El Observador that “what is worrying is to see that we are not advancing [in the ranking]. Given that economic freedom is correlated with better social and economic indicators, not advancing means that we are not improving on growth and progress.”

Central-American and Caribbean countries have a larger presence in the first and second quartiles, including Bahamas (49), Nicaragua (54), Dominican Republic (62), Jamaica (62), El Salvador (67), and Honduras (70).

The latter, however, has dropped 20 spots since the previous edition, which has drawn the attention of Honduran free-market think tank Eléutera. Executive Director Elena Toledo argues that strengthening the country’s institutions “is the only path forward to have a healthy and stable economy… and create a friendly environment to attract both domestic and foreign investment.”

As for Venezuela (162), the world’s least free economy, there is no light at the end of the tunnel. The Maduro regime refuses to reverse course on its socialist policies. Cuba, another outlier, couldn’t be ranked due to the lack of reliable data.

The report’s authors note that many Latin-American nations “score poorly for rule of law and property rights. The nations that rank poorly in this category also tend to score poorly in the trade and regulation areas, even though several have reasonably sized governments and sound money.”

Paz Gómez
September 25, 2018
Previous
Majority of Canadian Universities Fail Free-Speech Assessment
Next
People’s Party the Choice for Healthy Canada-US Relations
You might also like
One of the following
September 23, 2020