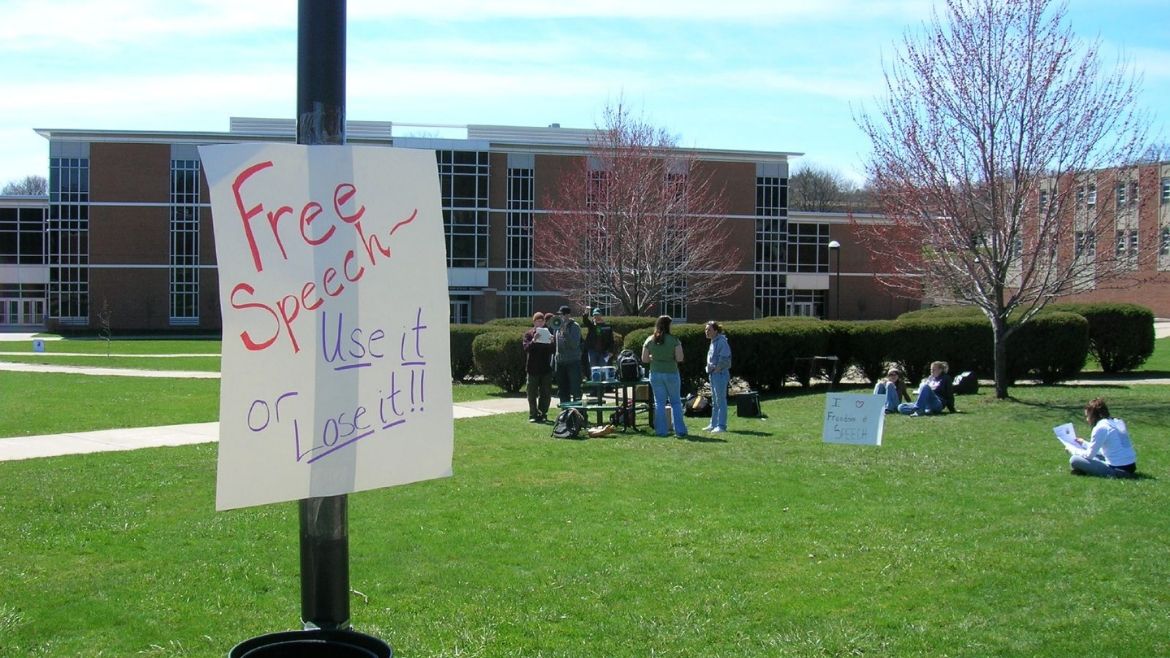 Mark Mercer, president of Canada's Society for Academic Freedom and Scholarship, says "Many universities promise to be fora for open and candid discussion, and then withdraw their promise by issuing safe and respectful campus policies … that assimilate words to harassment and violence." (Brian Turner)

Freedom of expression is becoming the exception rather than the norm at universities in North America. In Canada, only five out of 60 taxpayer-funded universities excelled at ensuring student’s speech rights during the last academic year.

The Justice Centre for Constitutional Freedoms (JCCF) released the 2018 Campus Freedom Index on September 19. Although the general state of freedom of speech at Canadian campuses only shows a slight decline since 2017, the report shares more disappointing news than achievements.

The index, published annually since 2011 and this year coauthored by Michael Kennedy and John Carpay, evaluates 60 universities on four aspects: the policies and practices of both the institutions and their student unions. JCCF assigns each university an A, B, C, D, or F grade in these four areas.

Behind the Free-Speech Grades

Censorship ranges from firing professors who hold controversial views and launching investigations into students to canceling events and imposing fines. For example, Saint Paul University of Ottawa prevented students from screening a film about abortion. The University of Victoria on Vancouver Island canceled a pre-approved pro-life event, which resulted in a court action against the university.

A case that made headlines involved Lindsay Shepherd, a graduate student and teaching assistant at Wilfrid Laurier University. Officials launched an investigation and reprimanded Shepherd for showing a televised debate on alternative and gender-neutral pronouns.

The Campus Freedom Index places a prominent weight on universities’ equal access to campus facilities and whether they impose restrictions because of controversial content or particular beliefs.

Besides reporting on the status of free speech in Canadian public universities, JCCF provides a valuable tool to demand accountability and fairness in campuses. The index reports that “Canada’s public universities receive more than CAD$14 billion [$10.8 billion] from the federal and provincial governments.” However, instead of fostering an environment for inquiry and academic freedom, the JCCF authors warn, campus administrators have made it a mission to create so-called safe spaces, impose speech codes, and threaten students who try to address controversial topics.

For that reason, JCCF has launched a petition to demand that provincial governments suspend funding for those universities that censor students, professors, or staff. The advocacy group is also holding an essay contest to encourage Canadian students to weigh in on whether governments should restrict funding from universities that engage in censorship. Among other initiatives, JCCF has sponsored student-built free speech walls since 2013.

JCCF helps students lobby campus unions, and it monitors university and provincial-government performance throughout the year. For instance, the Ontario government, under a new premier, has encouraged the province’s universities to guarantee free speech. JCCF published a news release noting this effort and announcing that Ontario is moving closer to the JCCF legislative proposal.

If enacted, some funding would be contingent on universities declaring themselves “a place for open discussion and free inquiry [with] no obligation to shield students from ideas or opinions that students disagree with or find offensive.” Nevertheless, JCCF also wants action on “security fees being used as a tool to censor controversial speech on campus.”

Concerns in the United States

Free speech on campus has long been a matter of debate in the United States. A study released on March 11 and sponsored by the Knight Foundation, the American Council on Education, the Charles Koch Foundation, and the Stanton Foundation examined a survey of more than 3,000 US college students. It showed that students have conflicting feelings on how to strike the right balance between free speech and respect for viewpoint diversity.

Students claim that talking about race, for example, could be dangerous in the current political climate. Evan Lanchnit, a journalism student at the University of Missouri, believes that racial issues are “something many will just avoid altogether.”

In response to a University of Missouri Police Department email asking students to report “incidents of hateful and/or hurtful speech,” the Foundation for Individual Rights in Education wrote a letter asserting that “It is crucial that students be able to carry out such debates without fear that giving offense will result in being reported to the police and referred for discipline by the university.”

Jonathan Zimmerman, a professor of education and history at the University of Pennsylvania, noted that racial debates have almost disappeared from campuses, given fear of confrontation. “There’s a crucial difference between curbing derogatory language and avoiding controversial topics altogether,” he wrote in a book.

He believes that the role of universities is precisely to encourage debate and allow dissenting opinions.

Louis Groarke is a philosophy professor at St. Francis Xavier University in Nova Scotia, one of Canada’s worst campus-censorship offenders. He told Antigua Report that faculty are concerned about possible complaints or restrictions on what they say in class: “It is a time fraught with culture wars and all that goes along with them.”

Groarke notes Rick Mehta’s firing from Acadia University, also in Nova Scotia, as one example of political correctness. Administrators cited other concerns, but Mehta responded to his August 31 dismissal and “stealth charges” with a post published by Mark Mercer, president of Canada’s Society for Academic Freedom and Scholarship.

“The real reason for my dismissal has to do with a culture war that is taking place in universities all over Canada and much of the Western world,” Mehta wrote.

“It hasn’t been a good year for freedom of expression on campus,” says Mercer. “Policies against freedom of expression on campus affect academics in many ways. They can make professors fearful of speaking their minds in public and fearful of running their classes as they wish.… Good teaching requires candor and sincerity on the part of the teacher, but teachers worried that students will complain about ideas expressed in class might well become guarded and false.”

Paz Gómez
September 19, 2018
Previous
5 Steps Colombia Can Take to Dominate Fintech
Next
Latin America Gets Failing Grade in Economic Freedom
You might also like
One of the following
April 14, 2022