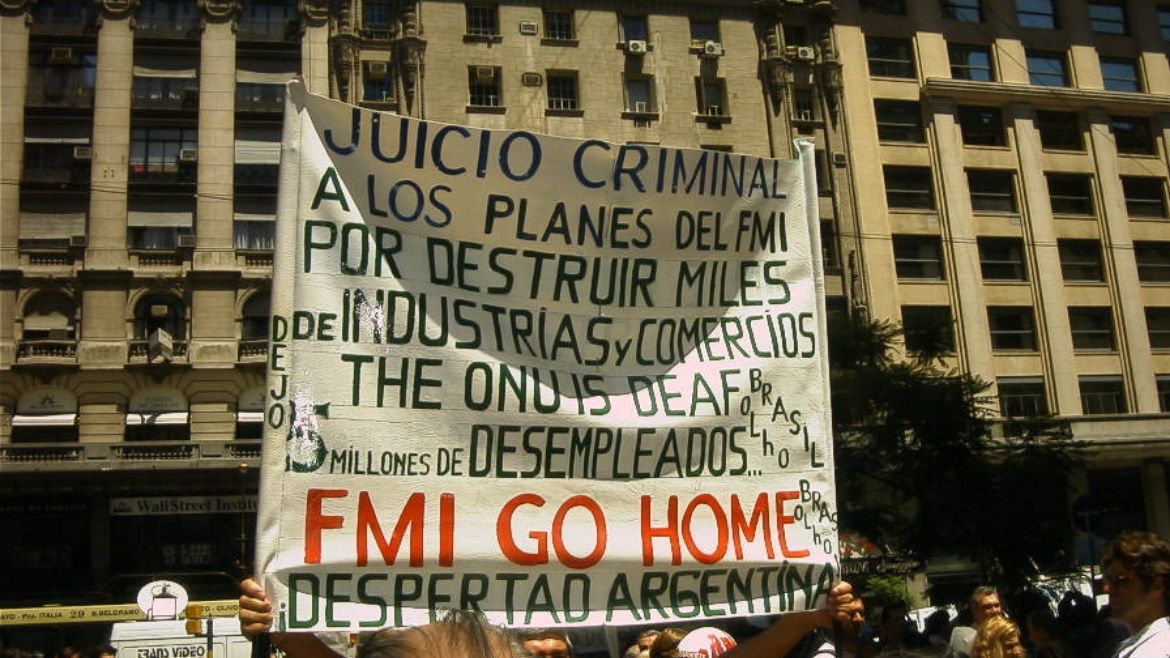 A protester in Buenos Aires protests the IMF during the "corralito," the 2001-2002 freezing of bank deposits. (Wikimedia)

Argentine President Mauricio Macri has had a tough week of his own making. He let down supporters with a bogus austerity package that includes cosmetic cuts and new taxes that will harm Argentina’s economic recovery.

One federation of farmers has called the higher export tariffs on products such as soybeans, corn, and maize “a betrayal.” These tariffs were the staple of the previous Cristina Kirchner administration, and Macri campaigned to eventually eliminate them due to the distortions they create in the economy.

During a televised address to the country on Monday, Macri asked farmers to “make a sacrifice” for the common good. He called the tariffs “very bad,” but he claimed that international conditions left him no choice in the face of a growing fiscal deficit.

There was a glimmer of hope due to rumors that a new economy minister would change course toward less government intervention. That hope died as Macri confirmed Nicolás Dujovne on Monday.

Another measure that has angered Argentine centrists and liberals alike was the introduction of a new tax on software exports. Franco Amati, a blockchain entrepreneur and bitcoin enthusiast, says of the new tariff: “Not even the Kirchneristas dared to do this. Trust [in the Macri administration] is completely broken, even among his base voters.“

Equally disappointing was the hollow announcement that over half of the central government’s ministries (12 out of 22) would be eliminated. The Macri administration has admitted that this is a political stunt: it implies no significant savings, since no layoffs or budget cuts are in the plan. Instead, former ministries such as of Health, Energy, Tourism, and Science will become “secretaries” under the authority of the remaining ministries—their payrolls intact.

The so-called austerity package comes after the Argentine peso tumbled around 20 percent last week. So far this year, the national currency has lost half of its value against the US dollar. In response, the central bank raised interest rates to the highest in the world: 60 percent, up from 45 percent. That means credit for struggling and small businesses is much more expensive.

On Tuesday, US President Donald Trump publicly backed Macri’s efforts. Support from the United States is key to securing the expedited $50 billion loan Argentina has been requesting from the International Monetary Fund (IMF). The loan comes with strings attached, most notably a reduction in the fiscal deficit. Macri pledged to go beyond that and balance the budget in 2019 and then achieve a 1 percent surplus in 2020.

Crisis Is the New Normal

There is just one problem: no one believes him. A lack of confidence in Macri’s gradualist or incrementalist strategy is what triggered the crisis in the first place. Instead of leveraging his 2015 electoral victory to tackle the deficit head-on, his administration took on more debt and tried to attract investors with assurances that Argentina was now a “normal” country.

If only. Last year, the government set an annual inflation target of 12 percent for 2018. In May, it grudgingly revised the number to 15 percent. Private forecasts now predict the annual inflation rate will go past 40 percent, among the world’s highest. The Macri administration acknowledges that another recession is unfolding, as GDP will fall by 1 percent this year.

When the Argentine government announced on August 30 that it would ask the IMF for an early release of the loan, it triggered the opposite of trust. Markets still remember the 2001 debacle after Argentina defaulted on her debt; the government froze bank accounts; and social chaos ensued. The IMF and other lenders had to bail out the country, effectively stiffing investors who held sovereign bonds.

The currency crisis is just the latest example of Argentine politicians wanting to have it both ways. They want to reform a dysfunctional economy without incurring the necessary social and political costs. Argentina used to be one of the richest countries on Earth. Now her GDP is less than the market cap of Amazon, a single company founded less than 25 years ago in a garage.

Yet they don’t learn the lesson of their own history. Macri’s so-called austerity package is anything but. Alberto Benegas Lynch, one of the country’s leading liberal intellectuals, penned an open letter asking Macri not to attempt reelection. He urged the president to instead make the hard choices needed to fix the economy and then go home.

Indeed, that would be the best way out—only if it weren’t so far-fetched. The renowned economist should know that there is little incentive for politicians to engage in the kind of romantic self-sacrifice that Macri is demanding of the Argentine people. At the end of the day, it’s not the president’s savings or livelihood that are on the line.

September 8, 2018
Previous
Venezuelan Regime Takes Bite of Remittances for the Starving
Next
Liberals Plan to Prevail in Populist Era
You might also like
One of the following
April 14, 2022