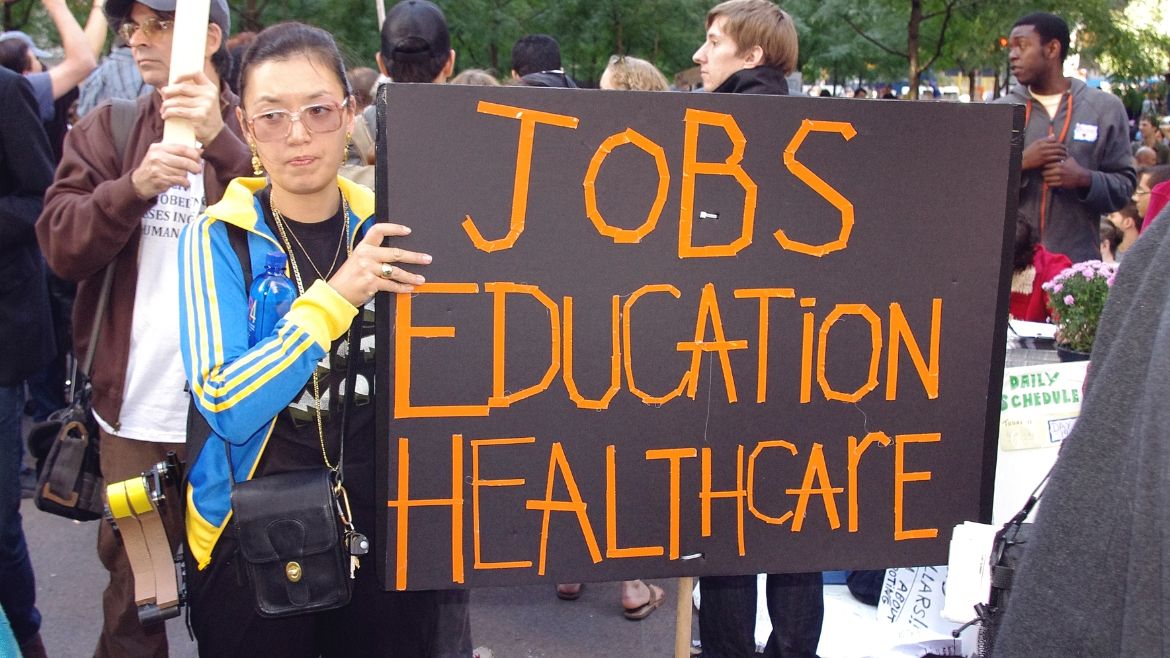 Until voters accept major spending cuts, they are digging the fiscal grave of the United States. (David Shankbone)

More than a decade ago, I attended a prophetic presentation. One of the world’s leading experts on generational accounting gave us a precise trajectory for US fiscal health.

Laurence Kotlikoff of Boston University had recently published The Coming Generational Storm (2005), and he detailed the demographic wave facing the next generation of taxpayers. At that time, he calculated the national debt—including unfunded liabilities—at US$51 trillion, and he warned that, in the absence of reform, the number would skyrocket.

Not only have there not been reforms towards fiscal sanity, both George W. Bush and Barack Obama signed laws that gravely worsened the situation. In 2014, Kotlikoff recalculated the true debt at $205 trillion and published his findings with the Mercatus Center. Out of desperation, he proposed a range of reforms and even ran for the US presidency, twice.

A more recent analysis from Jeffrey Miron of the Cato Institute reveals similar findings. Published as U.S. Fiscal Imbalance (2016), Miron’s book uses a different but related economic metric, which finds a $117.9 trillion shortfall over the next 75 years.

The book is essentially the combination of two white papers from Cato (here and here), with an introduction from past Cato President John Allison. Perhaps he and Miron thought the 68-page form for wider distribution might garner attention and make an impact. That didn’t work out, unfortunately, and the book has not a single review on Amazon.com.

To be fair to readers, Miron’s work has plenty of economic gobbledygook. He is “explicating” how one calculates a nation’s fiscal imbalance—not exactly the layman’s cup of tea.

That being said, for those inclined towards economic and policy research, there are nuggets of truth in U.S. Fiscal Imbalance that build on the work of Kotlikoff. In particular, both economists highlight the irrelevance of official debt numbers, which grossly underestimate (conceal) the true level of federal debt. Allison’s introduction accurately describes those numbers as “political accounting,” tailored to suit campaigns, not transparency or accuracy. (See the Institute for Truth in Accounting.)

Further, they note that the gravest problem facing US fiscal health is the burgeoning cost of Social Security and medical programs such as Medicaid and Medicare. The nature of federal spending has changed markedly over the past century. In addition to its vastly expanded scope, it has shifted proportionately away from defense and discretionary spending to mandatory entitlements, which have grown steadily since the 1960s.

The baby-boom generation, as they retire en masse, are handing off an astronomical and impossible burden to the next generation. As Trent England of the Oklahoma Council of Public Affairs quips, “when high population growth is the only way to keep [Social Security] going, then it is, by definition, a Ponzi Scheme.”

However, the most profound and important insight from Miron’s contribution is the political implausibility of sufficient spending cuts, which are unavoidable, since neither higher taxes nor higher growth provide a path to solvency. Kotlikoff’s runs for the presidency in 2012 and 2016 barely registered a blip on the radar. Apparently, fiscal austerity—”an immediate and permanent37 percent reduction in spending”—didn’t sell to either GOP or Democratic cronies, donors, or supporters.

In Miron’s words, whether voters are aware of federal indebtedness or willfully ignorant, “Such large cuts are politically difficult given that the programs benefit a huge fraction of Americans.” Most Americans (and Canadians) claim to support balanced budgets, yet they do not appear ready to accept that such a balance would require cuts to their precious handouts. Robert Higgs of the Independent Institute likens this cognitive dissonance to the desire for a smaller house without the removal of a single brick.

When creditors will lose confidence in the US Treasury and the US dollar, triggering higher interest rates and perhaps a fiscal panic, one cannot be sure. The United States could go on with the status quo of deficit spending for many years and perhaps even decades. (Hear Dan Mitchell discuss the time frame on the Mises Weekends podcast.)

However, that uncertainty over timing just means the crisis is a slow-moving train wreck. It does nothing to alleviate the inevitable consequences. To avert those, Americans will need both higher economic literacy, which U.S. Fiscal Imbalance attempts to aid, and a willingness to accept the truth and live within their means.

Previous
A Proven Strategy to Boost the Status of Women
Next
If You Can’t Beat Foreign Competitors, Copy Them

Fergus Hodgson
March 9, 2018
Previous
A Proven Strategy to Boost the Status of Women
Next
If You Can’t Beat Foreign Competitors, Copy Them
You might also like
One of the following
April 14, 2022