One financial theory receives nigh universal lip service yet runs counter to vast swathes of sector behavior. It makes a man wonder, if the efficient-market hypothesis (EMH) is correct—that all information is embedded in securities prices—why do we see so much fundamental analysis? Why bother, and would the last analyst please turn out the lights?

An explanation for the apparent EMH cognitive dissonance comes in the form of a historic book: A Random Walk to Nowhere (196 pages, 2020). Authors John Dobelman and the late Edward Williams, both Rice University professors in statistics, use the title to poke fun at the random-walk hypothesis and immensely popular 1973 book, A Random Walk Down Wall Street.

As someone who began business school in 2001 at the University of Waikato in New Zealand, only to start an MBA almost two decades later, I can affirm the EMH remains a bedrock of academic finance. My expat professor from the United States, Ed Vos, drilled it into us back in Hamilton. It became a chief lens through which I perceived the world. 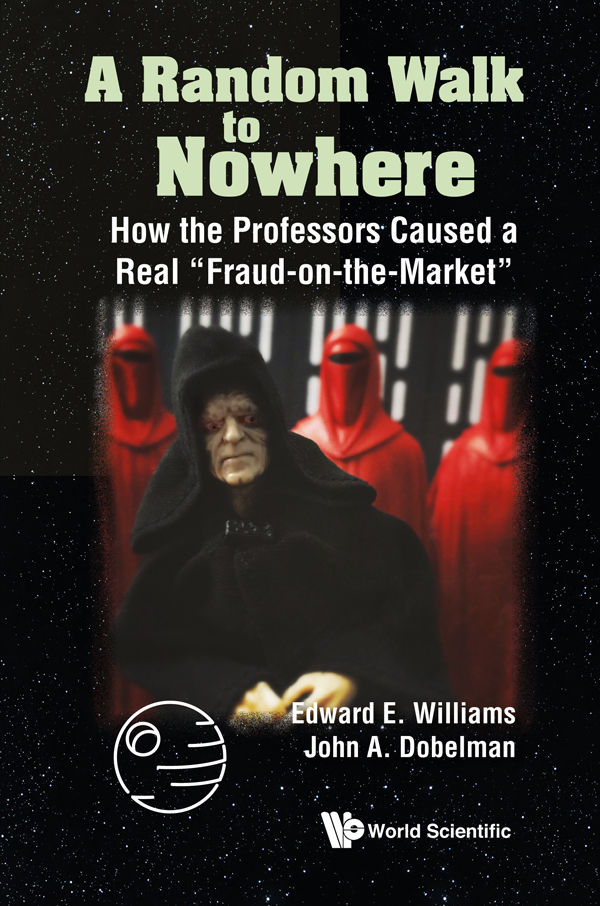 Dobelman is now one of my own instructors, and over the summer I got to interview him about the book’s significance. It gives a sobering reflection on the EMH’s validity and underlying assumptions, describing it as an intellectual fraud: “almost a religion that every financial economist had to buy into or risk professional crucifixion … [with] little basis in economic fact.”

The book’s subtitle indicates the more direct target: How the Professors Caused a Real “Fraud-on-the-Market”. In other words, its purpose is not solely or even primarily to refute the EMH. Rather, Dobelman recounts how business schools evolved over the past half century and came to adopt efficient markets as one of their central tenets. His is a work of history with plenty of comical anecdotes, since he and coauthor Williams witnessed much of this firsthand during their own careers on campus.

They note the longstanding awkwardness between business schools and universities, whose administrations often see business as out of place and inferior to the liberal arts. The weight of revenue quickly converted them, but the arms-length relationship remains. The authors suggest Harvard Business School’s location, across the Charles River from the Cambridge campus, is one symbol of the perennial divide.

To be fair, EMH advocates now give nuance and delineate efficient markets into three levels: weak, semi-strong, and strong. This is a de facto admission that no market is perfectly efficient. We encounter different levels of efficiency on a spectrum, and likewise Dobelman admits the EMH is useful as a thinking exercise.

One of my mentors, Donald Chambers—professor emeritus at Lafayette College and curriculum director for CAIA—explains that the EMH offers a physics-like reflection of markets. We should understand it as a frame of reference and not as an absolute. We can then identify, understand, and respond to the departures.

However, Dobelman’s concern remains: that many people, even judicial magistrates, take the EMH as a given and closed case. A statistician by training, Dobelman also sees shortcomings in the mathematics that underlay and stem from EMH, notably the conflation of risk and uncertainty.

He believes, not without justification, that business schools adopted mathematics heavily as a manifestation of physics envy. “By the introduction of mathematics into business research, the whole subject could be made ‘scientific.'” Even if business-school instructors, at least in the mid-20th century, were poorly equipped as mathematicians, the shift pushed back against the perception that they worked in “intellectual back-waters” with a “lack of rigor.”

Dobelman also believes business schools took to the EMH because of a capitalist affinity for free markets. There may be some truth to his belief, but it does not comport with my experience. Corporate executives—along with business-school students and professors—do not, in general, favor free markets. Rather, they favor protectionism and crony relationships as tools for sustainable competitive advantage. Further, the realization that markets depart from perfection does not infer that central planning better allocates resources.

Williams passed away in late 2018, so I never got to meet him. However, A Random Walk to Nowhere is a fitting legacy for which he and Dobelman can be proud. The book will age well as people appreciate their courage—taking on the dominant ideological agenda—and realize the need for skepticism regarding efficient markets.

They have written the book in a relatively accessible manner, not an easy task for such intellectually gifted and passionate men. There is plenty of challenging conceptual material, especially when they get to the capital-asset pricing model. However, any patient person familiar with finance will be able to digest its arguments.

Those who put the time in will find inspiration and more entertainment than one would expect from a book on academic finance. A Random Walk to Nowhere encourages the reader to look for the inefficiencies and opportunities that do exist, such as in cryptocurrency markets, and to profit from scholastic debate characterized by “civility and open-mindedness.”

You can listen here to my August interview with Dobelman on the Gold Newsletter Podcast.

Fergus Hodgson
October 27, 2020
Previous
How the Cuban Revolution Ate Its Own
Next
What Endangers the Alaska Fund
You might also like
One of the following
April 14, 2022