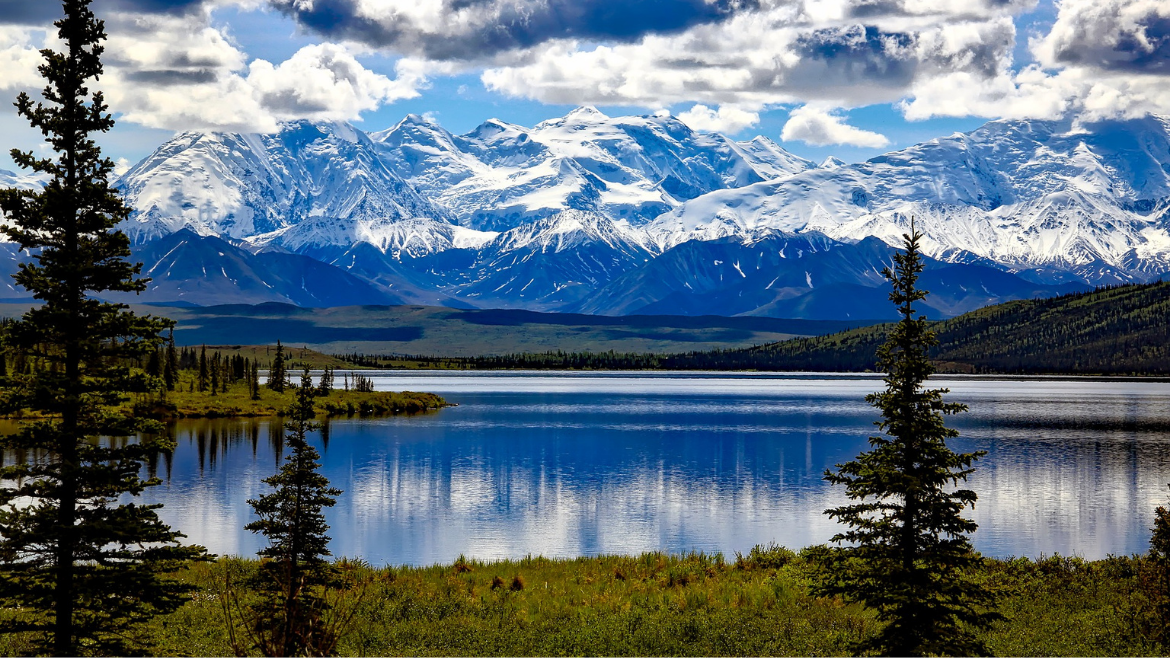 Few issues impact every single Alaskan more than the annual dividend from the fund. (12019/10259 images)

What is the Alaska Permanent Fund, and how did it come about?

The people of Alaska created the Alaska Permanent Fund in 1976 following the discovery of the Prudhoe Bay Oil Field. Since royalty revenues were derived from the extraction and sale of the state’s nonrenewable resources, the fund received the mandate to meet the needs of present and future generations of Alaskans.

The Alaska Permanent Fund Corporation (APFC) is a state-owned corporation that uses the oil royalties to invest in bonds, stocks, infrastructure, real estate, and private entities. The returns on investments grow the fund. Annual distributions to Alaskans in the form of a dividend exist since 1982.

The overall fund is divided into two parts: Principal, which cannot be spent without a constitutional amendment, and the Earnings Reserve Account (ERA), which can be spent with a majority vote in the Alaska Legislature and the governor’s approval. Aside from funding services and the dividend, the ERA acts as a shock absorber during market downturns. The current value of the fund is approximately $65 billion. 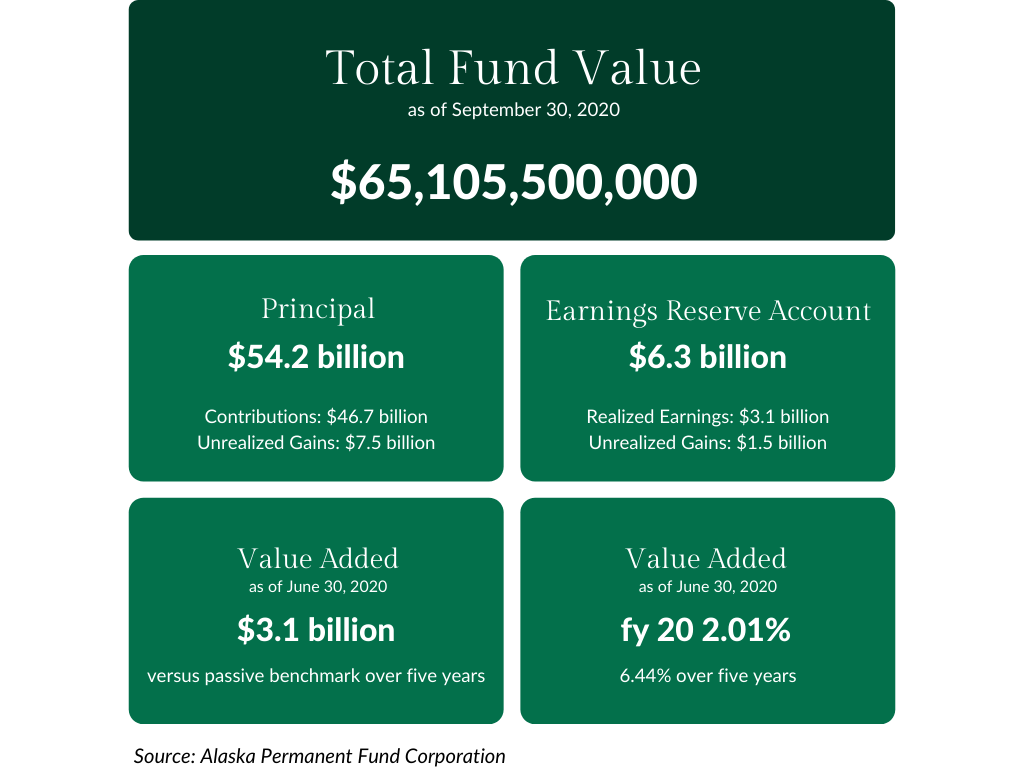 Who gets the annual dividends? How much are they worth?

Every full-time resident in Alaska, including infants, is eligible to receive the annual dividend. Every person who has been an Alaska resident for a year receives a Permanent Fund Dividend (PFD) from the state in late fall. In 2019, the dividend was $1,606 per person or $6,424 for a family of four.

Are they akin to a universal basic income? What research is there about the fund?

Universal Basic Income (UBI) is a periodic, unconditional cash transfer to all individuals without means testing or work criteria. Many laud the fund as the largest and longest-lasting real-life UBI trial in the world.

In recent years, especially with the presidential campaign run of Andrew Yang and his “freedom dividend,” the idea of a UBI has been gaining traction and becoming more mainstream.

The Alaska dividend payment can vary from a couple of hundred dollars to a few thousand depending on oil revenue. In contrast, Yang’s proposal would give $1,000 to every adult in the United States per month.

The dividend is not sufficient for subsistence, but it is significant for low-income individuals. A paper published in the World Development journal found that thanks to the PFD, “poverty dropped to about 22 percent among rural Alaska Natives and 9 percent among all Alaskans.”

How sustainable is the fund? What does it invest in?

Investment performance of the fund over its life has been respectable, though not spectacular, with an average annual return of 8.6 percent (not adjusted for inflation) over 36.5 years.

Concerns about the fund’s sustainability arise not from investment performance but from the inflows of oil royalties given the volatility of oil prices and declining demand.

The Alaskan state budget has been growing over decades alongside the rising price of oil. However, when the price of oil declined in recent years, the state budget did not decline proportionally. The gap between revenues and budget size is not sustainable. An analysis conducted by a consultancy indicated there is a 15 percent chance the reserve will run out of money during the next 10 years.

The fund accounts for 47 percent of state-government revenue, which is greater than all taxes put together. “We essentially have just under half of our state budget coming out of a savings account,” explained Craig Richards, chairman of the board of trustees, during a meeting in late 2019.

The Permanent Fund is an important stabilizer for the state budget, but Alaska had yet to recover from the 2015 oil-price collapse when the most recent one occurred. The state has spent $14 billion out of savings accounts over the past five years, and oil dropped from $85 a barrel in October 2019 to $55 in December, which eliminated $2 billion of potential revenue.

Have the checks spurred migration to Alaska or some other behavioral change?

All Alaska residents qualify for PFD after one year of residency, but there has been no empirical research conducted on the effect on migration.

The checks have been correlated with decreasing childhood obesity and increasing weight at birth. In Alaska, birth weight has increased by 17.7 grams for every additional $1,000 in yearly payments.

A 2018 report conducted by researchers at the University of Alaska Anchorage estimated that substance-abuse incidents increase in the days following the receipt of the PFD check. However, property crimes decrease.

The primary results of a paper published by the National Bureau for Economic Research suggest the dividend has increased fertility and reduced the spacing between births, particularly for females between 20 and 44 years old.

Despite concerns to the contrary, researchers have found that the dividend does not deter people from working but actually increases part-time work.

Why are politicians trying to alter the fund and how? Who opposes this?

Few issues impact every Alaskan more than the annual dividend. As oil-royalty inflows have diminished, the simple but uncomfortable reality is that—without limiting fund outflows—the sustainability of the fund is in peril.

Any politician has a difficult time acting responsibly and attempting to scale back the dividend. It hurts his popularity, a precondition to staying in office.

In 2017, as part of an effort to close the expanding budget deficit, Governor Bill Walker reduced the payouts. A poll of approximately 1,000 voters by the Economic Security Project, a basic-income advocacy group, found almost two-thirds of Alaskans favored keeping the dividend even if it meant increasing taxes.

When Dunleavy entered office, he made cuts of $444 million from the state’s operating budget to avoid raising taxes or reducing the PFD. However, this triggered a backlash: 21,000 Alaskans launched an unsuccessful recall campaign, attempting to remove him from office.

On February 21, Dunleavy announced “an exciting new opportunity for all Alaskans to own a piece of the Last Frontier.” He introduced legislation to give residents the option of vouchers (worth double the divided’s traditional cash value) toward state land purchases instead of receiving the annual dividend check.

Craig Richards, chair of the board of trustees, has proposed legal changes to combine the Principal and ERA because not having a single fund “creates an approximately 50 percent chance” that distribution, including dividends, will not happen in one or more years over the next two decades.

To ensure the fund’s continued existence, Alaska’s Constitution makes clear the separation of the nonspendable principal portion from the spendable earnings reserve. Revisiting the fund’s founding principles in a transparent process is a major political challenge and a sacrilege in the eyes of many Alaskans.

October 29, 2020
Previous
How Efficient Markets Became Academic Dogma
Next
Matthew Raphael Johnson’s Perversion of Latin American History
You might also like
One of the following
April 14, 2022