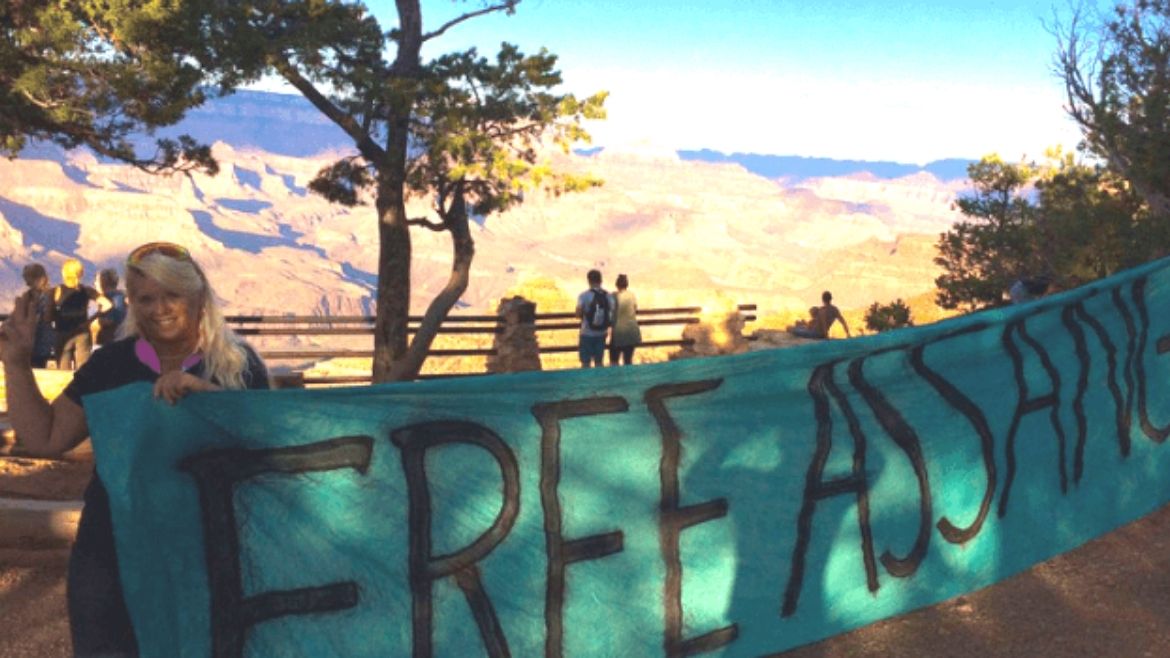 Julian Assange supporters pose at the Grand Canyon to demand his freedom. (#FreeAssange!)

Wikileaks founder Julian Assange has gone months without outside contact from his refuge in Ecuador’s London embassy. An international petition demanding that the Ecuadorian government give Assange back internet access is now close to hitting 100,000 signatures.

“You can disagree with him, mock him, despise him,” Varoufakis argues in a statement, “but you cannot ignore what he contributed to your understanding of crimes committed in your name against humanity.” The Greek economist has also recorded a video in support of Assange.

Ecuador, which welcomed the activist to her London embassy in 2012, suspended his internet access and visiting privileges last March and has sought to solve Assange’s status since. The petitioners argue that the isolation came after pressure from the US and Spanish governments.

Before having his communication channels blocked and his electronic devices taken away, the “creature of the internet,” as friends call Assange, commented on sensitive European issues. He complained about the eviction of Russian diplomats from 14 EU countries and compared the arrest of a Catalonia separatist leader with Nazi Germany.

A Thorny Issue for Ecuador

Since his arrival to the Ecuadorian presidency in May 2017, Lenín Moreno has devoted considerable efforts to solving Assange’s case. In exchange for safe haven, his administration asked Assange to stop opining on and intervening in the affairs of allied nations.

In late 2017, the Wikileaks founder even obtained Ecuadorian citizenship and signed a written agreement. However, Assange then went ahead and published several tweets criticizing the Spanish government over alleged human-rights abuses during the Catalonian protests for independence.

In July 2018, Moreno acknowledged that granting Assange Ecuadorian citizenship has only made matters worse. He argued that his predecessor, Rafael Correa, wrongfully disregarded negotiations with the United States, the United Kingdom, and Sweden.

Ecuador’s approach toward Assange has evolved as the new Moreno administration has deployed its own foreign policy. The Latin-American nation has opened up to trade and diplomacy, at least relative to before, so fixing Assange’s status has turned into a priority.

“It is neither our desire or Assange’s for him to remain a refugee for life,” Moreno asserted in July before traveling to Europe. “We must find a solution, and if we can find one together with the UK government that would be much better.”

Moreno told the Spanish daily El País that his administration is already negotiating a deal with the United Kingdom. When Assange eventually leaves the embassy, he will have to face the consequences for not attending judicial proceedings in cases against him.

Under the deal, once he has served the sentence in England, Assange would be able to move to a country where he feels safe. Moreno is hoping to convince the Wikileaks founder and his lawyer to bring an end to the embassy exile once and for all.

The costs of hosting Assange are not just political. La Posta, an Ecuadorian digital outlet, estimates that Assange’s stay and his basic expenses amount to $66,000 per year. Further, the Guardian and the investigative outlet Focus Ecuador have discovered that the Correa administration financed an espionage operation to protect Assange. They revealed that the government spent at least $5 million on it, and that both Correa and his foreign minister Ricardo Patiño were aware.

The operation included surveillance cameras, gathering of intelligence data, preparation for Assange’s escape, research on visitors, and more. Correa was so committed to protecting the whistleblower that he thought of appointing him as Ecuador’s UN representative to grant him diplomatic immunity.

Dora Ampuero, founder of the Ecuadorian Institute for Political Economy (IEEP) and promoter of Ecuador’s successful dollarization process, believes that the decision to give asylum to Assange was wrong in the first place.

“It was not Ecuador’s problem,” she told Econ Americas, “but now it is, and we have to solve it according to international law.”

“Ecuador shouldn’t spend more time on it and should allow Assange to face court,” she said. Instead of judging whether Assange is guilty or not, Ampuero believes the British and Swedish legal systems should decide that.

After six years in the London embassy, Assange’s lawyer Greg Barns told the Australian outlet iTWire on September 7 that the Wikileaks founder is in poor health and needs medical treatment. Since the UK government refuses to let Assange out of the Ecuadorian embassy without arresting him, he has not been able to attend medical appointments.

Barns claimed this is “a cruel and inhumane stance from a government professing to be a liberal democracy.” Although Assange remains mentally alert and physically stable, the lawyer said that his health could deteriorate if he remains in isolation without access to sunlight and fresh air.

In the meantime, the Parliament of New Zealand will discuss a request to offer Assange asylum and let him move to the country.

“Free Assange NZ,” a group of supporters, launched a local petition in July and gathered over 2,000 signatures. Labor Party legislator Greg O’Connor announced on September 9 that he will present the petition to Parliament given its popular approval, even though he personally does not support it.

Paz Gómez
September 12, 2018
Previous
Liberals Plan to Prevail in Populist Era
Next
5 Steps Colombia Can Take to Dominate Fintech
You might also like
One of the following
April 14, 2022