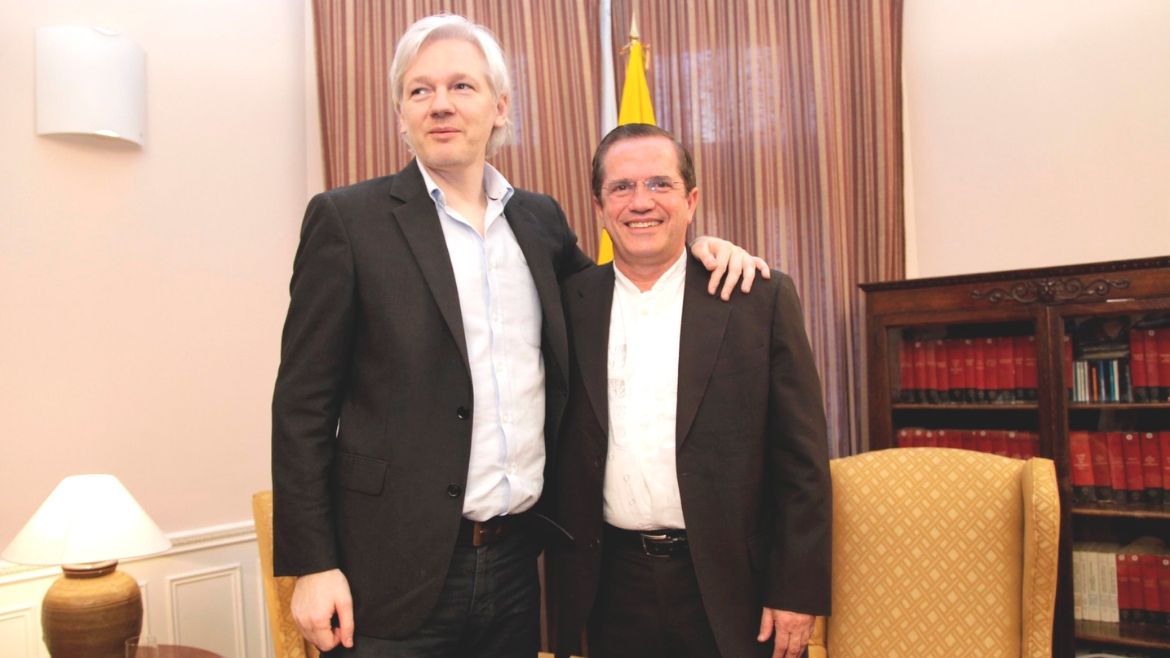 Julian Assange is in danger of becoming homeless, as he faces the boot from the Ecuadorian embassy in London.

The April 2 presidential runoff is rapidly approaching for Ecuador, with the promise of a stark shift towards market liberalization if opposition candidate Guillermo Lasso beats socialist Lenín Moreno of the incumbent PAIS Alliance. This will also mean a major adjustment in foreign policy, especially regarding Wikileaks founder Julian Assange, who has been sheltered by President Rafael Correa since 2012.

Moreno has stated support for the current regime’s position on Assange and has pledged to maintain the asylum. He has left himself a lot of wiggle room, though, by providing that Assange must not interfere with the politics of nations friendly to Ecuador.

Lasso, conversely, has declared that he would kindly ask Assange to leave the embassy. “The Ecuadorian people have been paying a cost that we should not have to bear,” he says.

Under Correa, Ecuadorian officials sought to improve their image on the world stage. Since the founding of the PAIS Alliance party, members have emphasized effective communication and the country’s image as their two most fundamental priorities. By protecting Assange, the Ecuadorians sought to convey an image of being a sovereign nation that takes a stand for human rights.

Ecuador also demonstrated herself to be autonomous from the United States. The government that has implemented and promoted 21st-century socialism has necessarily weakened bonds with the United States. One example was the decision close the US military base in Manta, while forging agreements with hostile nations such as Iran.

When Assange asked for asylum, back in 2012, Ecuador was still enjoying a bonanza from oil revenues. Hence, Correa could afford Assange’s asylum and a political confrontation with the United Kingdom and the United States. Ecuadorian authorities even went so far as to declare Assange a professional, award-winning journalist, whose human rights and freedom of expression might be jeopardized in the United States, Sweden, or the United Kingdom.

Asylum for the Wikileaks founder, consequently, portrayed Ecuador as a democratic nation that acted according to the rule of law and guarded her citizens’ rights and liberties.

The truth, however, is that the government of Correa is far from being fully democratic; nor does it show respect for freedom of expression. The regime lacks transparency; it has prosecuted several journalists and opposition politicians; and it has changed the communication laws to deeply limit media accountability.

In a recent display of indignation from Quito, Correa addressed the international community and asked “who is going to compensate the harm that has been done to Julian Assange and to Ecuador? Do you know how much it costs to maintain security at the embassy?”

Of course, Correa does know how much it costs to host him there, because he himself authorized it. Ecuador made a sovereign decision to give asylum to Assange and now must endure the consequences.

Although there are no explicit official figures available, Ecuador’s Foreign Relations Minister Guillaume Long has recognized that the cost of hosting Assange includes a lot of staff effort. Also, Correa asserts that the embassy has had to increase its security measures after experiencing multiple spy attempts since Assange’s arrival.

Meanwhile, an economic downturn has triggered shortages for Ecuadorian citizens. During a visit earlier this month, citizens complained about the lack of medicine at the Roldós Aguilera Hospital in the Coastal Region. The government clearly has more pressing priorities than housing the outlaw Australian journalist.

“Ecuador chose this diplomatic conflict for herself,” said Julio Clavijo, co-founder of Ikka Consultora, an economic and political consultation company. He suggests that if Lasso wins, the new administration should examine the status of the situation, as well as the lack of progress.

“Basically, the goal is to solve current Assange’s circumstance within the framework of human rights, so that he leaves the embassy once surmounting the problem.”

According to Clavijo, “the embassy is also not an appropriate home for Assange.” Ecuador, therefore, must solve any confrontations with the United States, Sweden, and the United Kingdom and cooperate to resolve the situation as soon as possible.

Whether or not the candidates support the asylum of the Wikileaks founder, there is a rising sentiment that Ecuador no longer has the capacity to bear the broader costs of Assange’s asylum. Lasso has asserted, for example, that the decision to shelter Assange was taken by a few, but it has led to human costs and money from us all.

Whatever the intent may have been, hosting Assange appears to have done little to boost the image of Correa’s democratic façade; nor has it improved international relations. There is no rationale to keep ignoring the United States, Ecuador’s main trade ally. Further, if Ecuador is serious about improving her image, then she must actually improve her record on human rights, as opposed to Correa’s gesture to impress the world with his “benevolent act” of hosting Assange.

Paz Gómez
March 22, 2017
Previous
New Party Breaks the Mold in Atlantic Canada
Next
‘The Goldwatcher’ Fails to Live Up to Its Cover
You might also like
One of the following
September 6, 2021

4 Things to Know before Investing in Ecuadorian Stocks

How to Choose a Brokerage in Ecuador