Max Borders Proposes a Better Way, Grapples with How to Build the Bridge 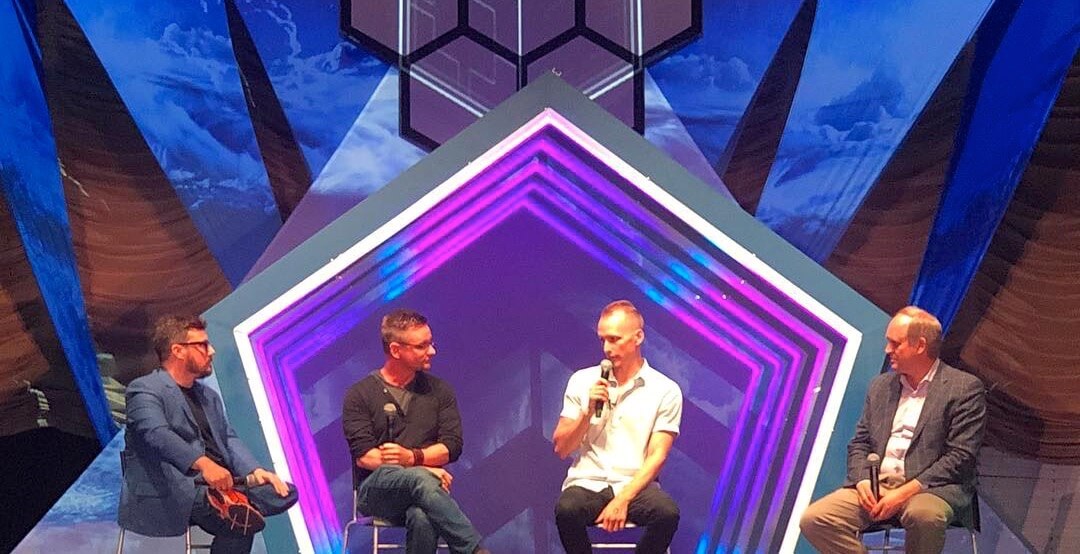 Max Borders (center left) participates in a panel at the 2018 Voice and Exit event in Austin, Texas. (V&E)

The nation-state as we know it is obsolete.

Humanity never reached the “end of history,” as famously postured by Francis Fukuyama in his 1992 book. Technological innovation and heightened awareness mean we can surpass the achievements of liberal democracy and transition to a new era of human flourishing.

Max Borders, in his blazing new book, The Social Singularity (208 pages), seeks to address what that new era will look like and how we can most successfully adapt. Not only does he describe the rapid process of creative destruction—or subversive innovation, as he prefers to call it—he makes a moral claim for why we should embrace the approaching new order: “Decentralization will allow us to transcend politics, create global prosperity, and avoid the robot apocalypse.” 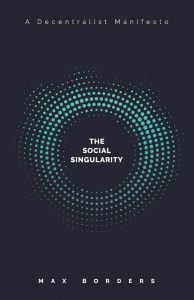 Borders’s overarching objective or outlook on the horizon, the “social singularity,” encompasses both an age of abundance and a genuine withering away of legitimized violence. “Politics, though still potent, will slowly lose its central place in human affairs.” In other words, “innovation will usurp politics.”

His initial claim is compelling: democracy centralizes decision making based on ignorance, tribalism, and superficial ideology—a recipe for errors, division, and misallocation. The humorous and blunt manner at the outset perks the reader’s interest for more, dangling the question of how we might get out from under this conundrum.

The following themes can be categorized roughly as the mechanics, trajectory, and values of the social singularity or post-political era. This is where Borders—cofounder of the Voice and Exit event in Austin—faces greater difficulty. Pointing out the problems of the prevailing nation-state is one thing; making a believable and persuasive case for its alternative is another matter altogether.

Borders contends that peer-to-peer transactions, sometimes referred to as the sharing economy, are enabling a less hierarchical economy, and alternative currencies are undermining the power of the state. My favorite example is the notion that “cryptocurrency and income tax cannot coexist.”

The sought-after outcome of such a process is what Borders calls polycentricism or polyarchy, along with radical decentralization to enable near-universal consent of participants. It means multiple, competing sources of legal authority within the same geographical area, so that authority depends on one’s preferred subscription or allegiance.

Borders acknowledges that trickier elements of government are closely tied to geography: national defense, justice and dispute resolution, and the environment and waste disposal, although his dream would be to see all such activities on a voluntary, competitive basis. His conclusion, at least for the near future, is that territorial and non-territorial functions of government need to be disentangled.

Whether anyone besides the choir (which includes me) will sign up for this is unclear. An immediate concern is how to overcome the recipients of state largess, be that corporate welfare, state education, or pension schemes. Borders and I are believers in personal sovereignty and being the master of one’s own destiny, but we are a rare breed. Many people will fight to protect what they are accustomed to, which is living at the expense of everyone else.

Perhaps the transition will come simply because taxation will grow easier and easier to avoid. Perhaps “social services” will become so undesirable that no one will even want them. Perhaps there will be a widespread change of heart.

The predicament could be the topic for Borders’s next book: how to forge win-win relationships with those who feed at the trough of taxation.

The likelihood is slim that The Social Singularity will reach such defenders of the status quo. The book is written in a style inaccessible to the layman, although the why may make it appeal even more to a niche audience. Borders has his own distinct prose, and it can be a tough nut to crack with frequent use of obscure jargon: holonic, fractals, interstices, and noosphere, for example. These terms do have precise meanings in the context, but the book will send readers to their dictionaries, unless they are full-blown anarcho-libertarians and tech-geeks.

Add plenty of lengthy block quotes, awkward editing, and hippie analogies, and the readability declines. Borders seeks to be an iconoclast, so his non-traditional syntax and vocabulary do not come as a surprise, but they take getting used to and could put off unacquainted readers.

Whether readable or not, the underlying themes remain of utmost importance, and Borders has taken a shot at an extremely difficult topic. He has brought together fields ranging from artificial intelligence and political economy to ethics and history—no easy task for the best of men.

That means The Social Singularity is a beginning, a noble attempt to lay the groundwork for the post-political era. Ahead of its time to some degree, the book will likely age well. Just as the trends outlined in the book are advancing at a rapid clip, so too will our capacity to comprehend their importance and apply the book’s insights.

If you want to learn more about Borders’s work, consider following his Social Evolution nonprofit. Further, you can hear him on the Gold Newsletter Podcast.

Previous
OAS Performance: Democracy and Human Rights
Next
The Anatomy of Venezuela’s Chavismo

Fergus Hodgson
August 29, 2018
Previous
OAS Performance: Democracy and Human Rights
Next
The Anatomy of Venezuela’s Chavismo
You might also like
One of the following
April 14, 2022