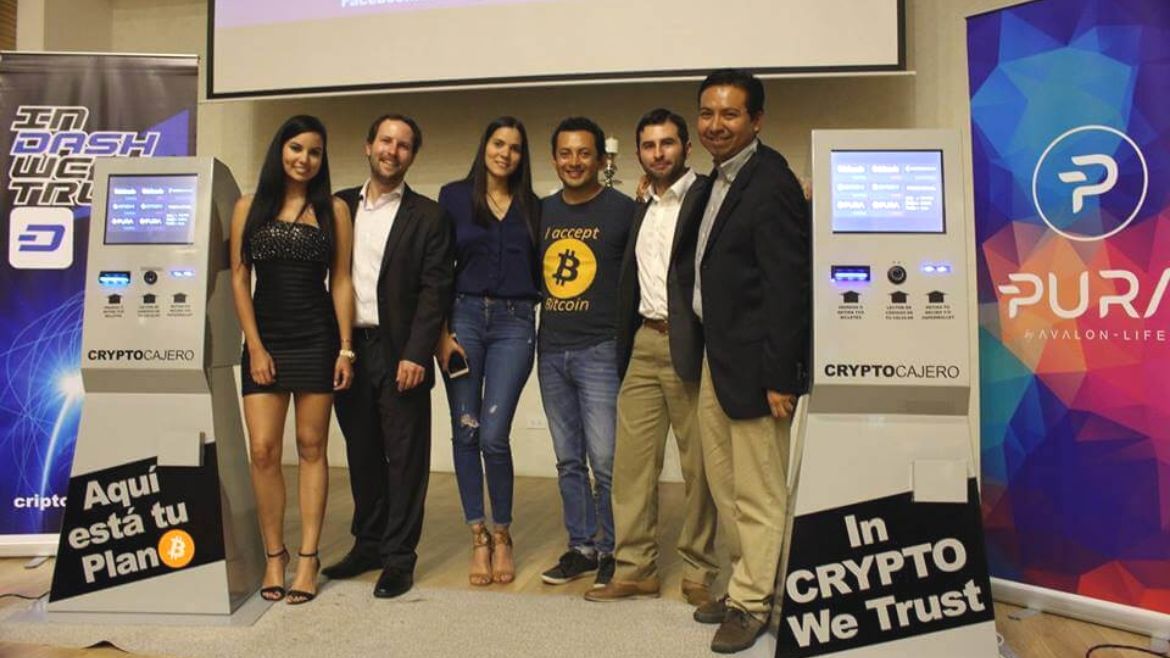 Over 100 people attended the presentation of the first crypto ATMs assembled in Ecuador. (Dany Ledesma)

The Ecuadorian government has been trying—and failing—to ban cryptocurrencies since 2014, when it outlawed all digital currency besides the state-run dinero electrónico.

In January, the country’s central bank issued a statement clarifying that buying and selling bitcoins is not illegal, but using them as a payment method for goods and services is.

Enforcement, however, has been lax, and Ecuadorians have shown little interest in dinero electrónico. Official figures show that over 70 percent of accounts remain unused, and Ecuador’s parliament approved a new law this year which transferred the government-backed digital currency to the private banking system.

Every day, more and more Ecuadorians trade goods and services thanks to bitcoin and other emerging digital currencies, as evidenced by sellers and buyers listed on Localbitcoin and on several social-media communities.

However, misinformation and fraud schemes that use cryptocurrencies picked up by local media have hampered widespread adoption. That’s one reason why Criptoasesores, a group of consultants, recently installed the first locally assembled ATMs in the capital, Quito, to provide Ecuadorians with a secure and easy way to acquire and sell cryptocurrencies.

They presented the two ATMs, which together cost $22,000, during a launch event on February 8. They explained how to use them to exchange dollars for bitcoins, dashes, and puras—”the world’s first socially and environmentally conscious cryptocurrency,” with a market capitalization of over $78 million.

No prior contact with digital currencies is needed, not even the ownership of an e-wallet. The ATM prints out the information for a new wallet where the acquired currency has been transferred to. However, to sell them, one should already have a device with a wallet and make a normal transaction to the address provided by the ATM. After verification, the ATM hands out the money and a receipt.

Dany Ledesma, a member of Criptoasesores, told Antigua Report that the ATMs were no longer available to the general public for legal reasons, and that they were using them as an educational tool in their workshops and marketing efforts. “We continue to work to improve the ATM’s technology and find a profitable business model,” he said.

Ledesma argued that these machines would raise confidence in cryptocurrencies and help avoid scams. Criptoasesores, who also offer investment advice and a cryptocurrency-backed debit card, expect to assemble more ATMs and even export them to neighboring countries.

One week after the presentation, the Ecuadorian Central Bank responded and declared the ATMs illegal, citing a lack of permits to operate. The government is now considering legal actions despite glaring loopholes and ambiguity in the law.

Ledesma contends that the ATMs are just a more reliable way to buy and sell cryptocurrencies, which is allowed. The central bank’s attack, he says, is proof that Ecuadorian authorities are concerned about and keeping track of developments in the industry.

These Ecuadorian entrepreneurs were aware that they would start to draw the government’s attention, so they are already working with authorities to solve the issue.

“One of our goals is that the sale and purchase of cryptocurrencies become formal and legal, so people can engage in safer and more secure transactions,” Ledesma concluded.

Paz Gómez
February 26, 2018
Previous
A Simple Way to Open Global Trade
Next
1980s Film Offers Rare Defense of Somoza’s Nicaragua
You might also like
One of the following
April 14, 2022