Yet Another Venezuelan Currency, Even Worse than the Petro

Locals Attempt to Fight Cash Shortage, Hyperinflation with the Panal 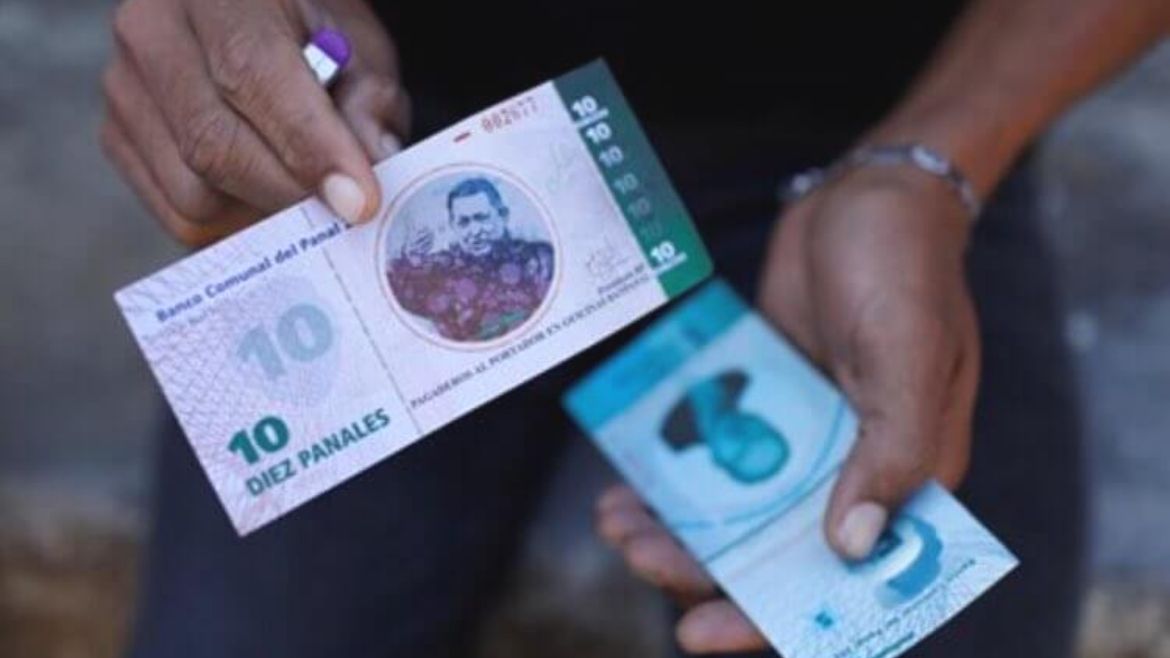 The panal currency has three denominations: 1, 5, and 10, exchangeable for the almost-worthless national currency. The first two bills feature socialist activists, while the 10-panales bill has the image of Hugo Chávez. (@Alexisvive2021)

Yet Another Venezuelan Currency, Even Worse than the Petro

So much inflation, so few bills: even staunch Chavistas now acknowledge that Venezuela’s monetary policy has gone astray. Since the announcement of a forthcoming Venezuelan cryptocurrency, the petro, one socialist comuna has started its own currency to fill the vacuum that the lack of bolívar notes in circulation created.

Sadly, their plan will solve nothing and has left economists scratching their heads.

Inflation in Venezuela has risen into hyperinflation, and people often weigh banknotes instead of counting them when exchanging bolívares for another currency, such as the US dollar or the Colombian peso. For example, at the beginning of 2017, VEF$1 million in bills of 100, weighed 11.26 kilograms.

The printing of bolívares has simply not kept up with the speed of inflation, creating an inevitable cash crunch. The shortage in turn causes other problems, like long lines at ATMs — up to two hours — which only allow people to withdraw a maximum of VEF$100,000 per transaction (about 50 US cents).

That provides barely any purchasing power, such as a small coffee on the street. That situation forces people to keep going back to their banks or ATMs for more money, which empty out quickly. Several small businesses — even informal ones on the streets — have gotten swipe machines, but the network gets so overcrowded that it works slowly and often fails.

The Socialist Commune Panal 2021, however, has the answer! In Spanish, the Comuna Socialista el Panal 2021, that the Alexis Vive Foundation manages, is located in the 23 de Enero neighborhood of Caracas, and they have offered members a solution since December 11. Their own bank (BanPanal) has introduced the commune currency: the panal (which means honeycomb).

The panal consists so far of three denominations: 1, 5, and 10, and each unit is sold for VEF$5,000 (US$0.03). The first printing is in a pilot phase. Users can purchase community-produced rice during planned-supply sessions. However, members can only obtain a limited amount of the product, to prevent hoarding or reselling. One kilogram of rice costs three panales.

Currently, the commune of 4,000 families produces vegetables and has a bakery, a textile factory, a sugar- and rice-packing factory, a restaurant, a pay-TV operator, and the bank, which has already given 100 small credits. On December 26, the regime also gave them a big boost by granting them, through the National Land Institute, 600 hectares located in Guarico state (in the middle of the country) for cereal production.

Robert Longa, one of three spokesmen for the Alexis Vive Foundation, explained their commune economic system in this way: “we are building up our zones of exclusive communal production, which in Stalinism were called socialist areas. So we’re shaping our economic system at every level in order to fight against the hyperinflationary offensive.”

The three leaders say their legal basis for introducing this local currency, and all their economic model, is the Law for the Communal Economic System, created in 2010 during Hugo Chávez’s presidency.

They have planned two more stages for their currency: the second one is to incorporate the cryptocurrency petro as part of their reserves, among other cryptocurrencies and minerals. Finally, they want to expand their reserve and gain the community members’ trust so they would want to get saving accounts at BanPanal.

Although the commune’s spokesmen argue their purpose is not to reject the bolívar or create a parallel currency, but to protect their local economy and help defend the nation from the “international financial blockade.” In fact, their new currency just proves that no one wants bolívares, not even the most passionate activists of the regime.

Abandoning the bolívar seems unavoidable, and an economics lecturer at Francisco Marroquín University in Guatemala says it simply must to be done. The commune got the first part right, but they cursed the project by backing the panal with the very problem to begin with, the worthless bolívar.

They also remain wedded to the socialist folly that has brought Venezuela to her knees. So long as they continue with central planning and collective ownership, no matter what currency they use, it will eventually lose its value and succumb to a lack of real production. It already happened with the bolivar fuerte, introduced in 2008.

Guest Author
January 22, 2018
Previous
Seasteading Offers Escape from Obsolete Governance
Next
La crisis de Venezuela que los socialistas no quieren asumir
You might also like
One of the following
April 14, 2022