Tahiti Beckons as Home for Implementation, Competitor to Status Quo 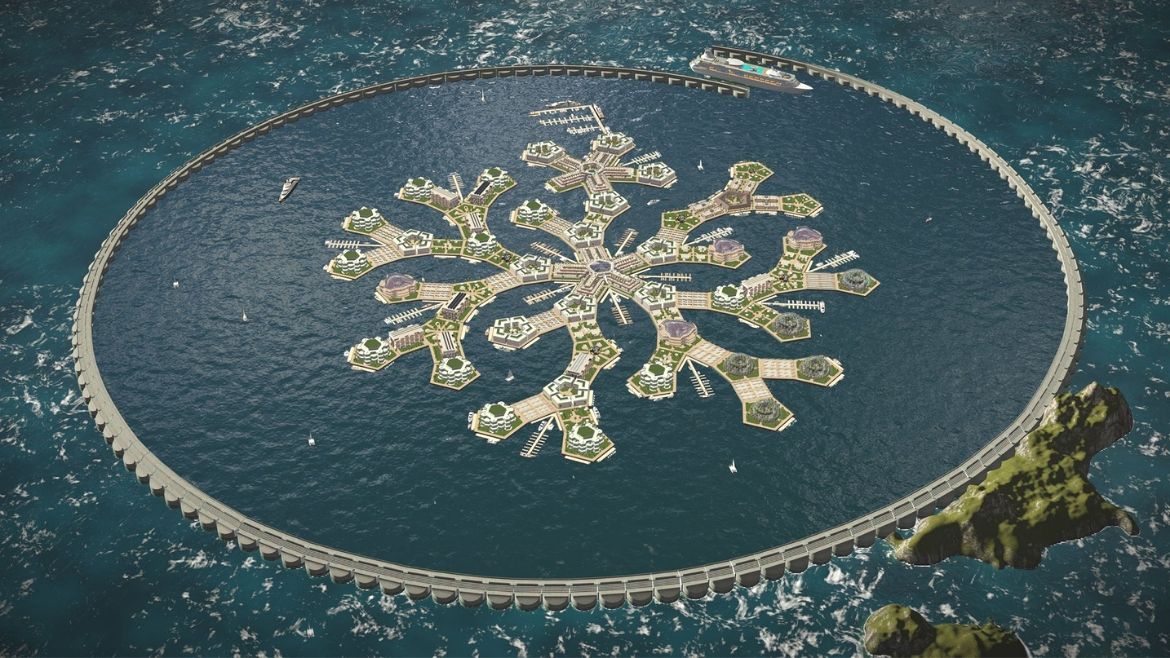 Planned man-made islands of the Seasteading Institute boast the potential to compete with conventional governance. (SI)

In 2008, two entrepreneurs from Silicon Valley, Patrick Friedman* and Peter Thiel, cofounded the Seasteading Institute to create awareness and solutions to overbearing governments that hold back innovation and repress social progress. Since escaping from that level of control is extremely difficult, they proposed man-made Islands with innovative and competitive governance.

Their goal of executing the first one by 2020 may well come to fruition.

In January 2017, the institute secured a spot for developing their idea when they signed The Memorandum of Understanding with the French Polynesian government. This permits the institute to explore the nation’s waters to select the exact locations, and the locals commit to the creation of a “special governing framework” for an “innovative special economic zone.”

This memorandum also demands three actions from the Seasteading Institute: (1) an analysis demonstrating the economic benefits for French Polynesia; (2) a study assuring the protection of their ocean and seabed; and (3) legal research.

The institute has already surrendered the research on the three topics and chosen the south side of Tahiti as the location. The French Polynesian government will have the “SeaZone” legislation ready in the first six months of this year.

The Floating Island Project (the pilot phase) consists of 12 semi-autonomous and sustainable floating platforms that will support homes, businesses, research centers, shops, and community spaces. Each seastead (floating unit) will be 25 by 25 meters, and will be able to host a family or up to 30 people.

The Dutch engineering firm Blue21 is in charge of the designs. They estimate the pilot phase will cost between US$30 and $50 million, and each housing unit will be around $5 million.

Although the French Polynesian government supports the project, it will not subsidize or invest in it. Blue Frontiers, a Singapore-based company that the Seasteading Institute created in 2017, will fund, plan, and execute these types of projects. In fact, they have already raised their first round of seed investment, and they’re working on creating their own cryptocurrency for investment and sales called token.

The idea sounds radical and like science fiction, especially if you’ve watched Kevin Costner’s movie Waterworld. However, it’s similar to existing special economic zones, which are essentially small portions of land with business-friendly legal frameworks, distinct from the rest of the country. Lawmakers created these zones to offer more freedom for entrepreneurship and innovation.

The major difference (and challenge) with seasteading is that Blue Frontiers will have to create their own land, on the water, and that is extremely expensive. On the other hand, these kinds of projects might appeal to some governments, because they don’t require taxpayer funding but can economically benefit the nation’s citizens. For example, Blue Frontier says it will designate 25 percent of the living and working spaces for Polynesians, and the project has a lot of potential to become a tourist and investment attraction for the host country.

So why bother to create floating cities if they will function similarly to special economic zones?

In addition to a wider scope for legal innovation, the Blue Frontiers project intends to overcome two more problems: rising sea levels — a particular problem for Polynesian Islands — and other environmental challenges associated with conventional living.

Novelists, engineers, and entrepreneurs have imagined similar concepts for decades. Ayn Rand described in her novel Atlas Shrugged a natural space, Galt’s Gulch, devoted to creative free-thinkers so they could develop their full potential. In the mid-20th century, Buckminster Fuller designed a floating city named Triton, per a wealthy Japanese patron’s request for a solution to Japan’s tsunami problem. Fuller’s Triton was also of interest to the American government, but just as in Japan’s case, it never went beyond the planning phase.

The seastead startup society could see the same fate. But then again, this case is a notable step forward — given the agreement with the French Polynesian government and the first seed round — and naturally, it is generating international excitement.

The potential for lost capital is great too, but there is also much to be gained and learned with a project like this one. At very least, it highlights the relevance of Robert Ballard‘s final question in his 2008 TED talk: “Why are we not looking at moving out onto the sea? Why do we have programs to build a habitation on Mars, and we have programs to look at colonizing the Moon, but we do not have a program looking at how to colonize our own planet? And the technology is at hand.”

*No longer part of the Seasteading Institute.

Previous
Do Third-World Migrants Benefit the United States?
Next
Yet Another Venezuelan Currency, Even Worse than the Petro

Guest Author
January 19, 2018
Previous
Do Third-World Migrants Benefit the United States?
Next
Yet Another Venezuelan Currency, Even Worse than the Petro
You might also like
One of the following
April 14, 2022