A contrarian account is inherently provocative and inclined to garner attention. However, when a self-proclaimed expert on Latin America repeatedly spells Colombia as “Columbia,” the jig is up. This train wreck by Matthew Raphael Johnson, Defending Latin America’s Military Governments (140 pages, 2019), demonstrates how someone can pervert history for ideological reasons.

His cart-before-the-horse approach is also a warning. Progressive hegemony in academia is a problem, but that does not mean any alternative will do. Johnson’s blind spots and slanted depictions are self-defeating and worse than those he criticizes. 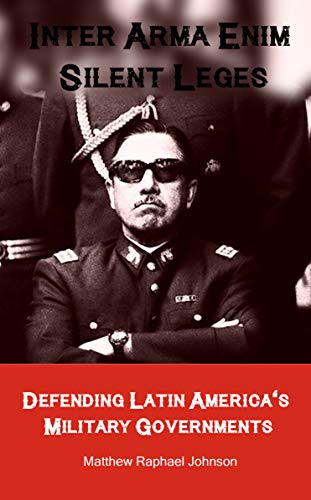 The book is more pitiful than anything else. Johnson barely knows how to write, and he obviously did not get help from an editor. He repeatedly mistakes its for it’s and relies heavily on block quotes. National socialism is his unabashed reason for writing, and he will not let his illiteracy get in the way.

Inadvertently, Johnson is an advertisement for the merits of peer review. His book does not define military governments, and many times he asserts with zero backing that a person or regime was successful, as though writing it makes it true. The little economic data he presents does not account for inflation and usually goes without a source. This book would not stand the slightest professional scrutiny.

There are a few kernels of truth in Defending Latin America’s Military Governments. Johnson notes persistent misreporting by progressive media in the United States. He also pushes back against false assertions that US foreign policy supported the likes of Anastasio Somoza in Nicaragua and Augusto Pinochet in Chile.

However, Johnson’s shallow and tortured understanding of Latin American history, combined with his uncanny arrogance, beggars belief and derails any argument he makes. His knowledge is so slim he does not know that the famous Chicago Boys were from Latin America, mainly Chile, and not the United States. Most of these economists studied at the University of Chicago, hence the moniker.

If that were his only historical error, he could be forgiven. However, Johnson makes many false assertions that a lay reader would rarely detect. For example, without citing a single source, Johnson writes that Lori Berenson of New York was a university professor and the leader of the Tupac Amaru Revolutionary Movement in Peru. This lady, for whom I am no apologist, failed to complete an undergraduate degree. Her prosecutors accurately described her as a terrorism accomplice, a crime for which she served 20 years of imprisonment in Lima.

Johnson likely believes his assertions, but he makes no attempt to be evenhanded or address alternative perspectives. Consider that his cover page carries the Latin phrase Inter Arma Enim Silent Leges. This means that in times of war, the law falls silent. It is a nod to his win-at-all-costs mentality and fierce opposition to democracy: “In the Third World, democracy destroys nations.”

Johnson uses his foundation of sand to defend some of the worst dictators in Latin America, including Alfredo Stroessner. Apparently, this man “remained popular during his very long, successful rule over Paraguay. Economic growth was substantial.” Anyone can take a trip to Asunción and see for himself the absurdity of Johnson’s claims. The scars of Stroessner’s 35-year repression and parasitism remain all too evident three decades on.

The revisionist defenses get worse. Johnson celebrates the vast nationalizations and import-substitution policies under Juan Domingo Perón (1895–1974). This man’s catastrophic legacy, Peronismo, haunts Argentina to this day. “He promoted the fossil fuel industry by ordering these resources nationalized,” Johnson writes, as though by definition nationalization promotes an industry. One need only look to Venezuela for a counterexample.

Perón embraced political patronage and might as well be the definition of clientelism. He corrupted the Argentine economy by partnering with unions that now paralyze the country on a whim. Argentina has one of the world’s least free economies and some of the most burdensome taxes. Inflation has been brutal, at 50 percent annually between 1934 and 2012. Even official inflation is at 36.6 percent in 2020.

“The typical histories of the era needs [sic] to be rewritten,” according to Johnson. However, the notion that his book overturns historical accounts or proves anything is preposterous. I went in as an eager reader open to a new perspective; I came out seeing him as a cherry-picking charlatan and lazy ignoramus, an embarrassment to heterodox thinkers.

At times, Johnson tries to appear academic, with a few citations sprinkled in. He also plays the victim card, as though he is unjustly persecuted by the thought police. One might believe him, except for the fact that his work is sloppy, superficial, and poorly informed.

Anyone with a cursory understanding of Latin America will go away disappointed. Matthew Raphael Johnson has let his own ax to grind overshadow any reasonable presentation of the governments under consideration. For those interested in a substitute, Álvaro Vargas Llosa’s Liberty for Latin America is hard to beat.

Fergus Hodgson
November 23, 2020
Previous
What Endangers the Alaska Fund
Next
Monetary Metals Turns Gold Into Fixed Income
You might also like
One of the following
March 17, 2022