Fiscal Necessity at Odds with Perils of Entitlement 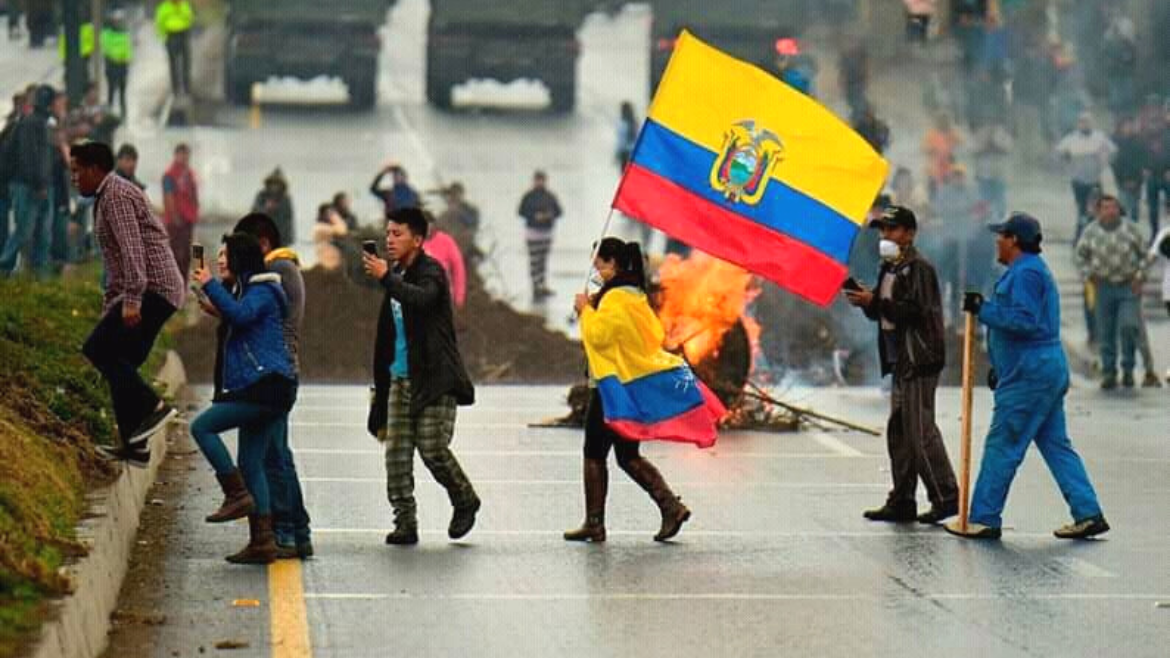 On October 1, President Lenín Moreno announced six austerity measures and 13 economic reforms in line with an aid agreement struck with the International Monetary Fund (IMF). A key change repealed 40-year-old subsidies on low-octane gasoline and diesel fuels that cost the government around $1.3 billion per year (7 percent of its annual spending).

Opposition movements immediately rejected the measures and called for nationwide strikes and marches. Following several days of social unrest, on October 12, the United Nations and the Ecuadorian Catholic Church managed to mediate dialogues between the government and the Indigenous movements and labor unions.

What triggered the protests in Ecuador?

On October 1, President Lenín Moreno announced six austerity measures and 13 economic reforms in line with an aid agreement struck with the International Monetary Fund (IMF). A key one repealed 40-year-old subsidies on low-octane gasoline and diesel fuels that cost the government around $1.3 billion per year (7 percent of its annual spending).

In the public sector, Moreno sought to halve vacation days for permanent employees, reduce the salaries of temporary contractors, and cut 23,000 jobs. Under the reforms, both government and private-sector workers had to increase their social security and tax contributions. Moreno also proposed more flexible job contracts for startups and remote-work alternatives across the labor market.

While President Moreno wanted firms earning over $10 million annually to step up their tax burden for three years, he also introduced business-friendly reforms such as eliminating the withholding income tax and abolishing or reducing import duties on manufacturing equipment and raw materials.

Several opposition movements immediately rejected the austerity measures and called for nationwide strikes and marches. On October 3, transportation unions took to the streets over the 30 percent price increase for gasoline fuel and the 123 percent hike for diesel fuel. They reached a deal with the government that allowed them to raise the prices of bus tickets and called off their protest on October 4.

However, several opposition groups moved forward. The Confederation of Indigenous Nationalities of Ecuador (CONAIE), the country’s largest indigenous organization, started its national strike on Monday, October 8. Labor and student unions joined them. Following days of social unrest, on October 12, the United Nations and the Ecuadorian Catholic Church managed to mediate dialogues between the government and the Indigenous movements and labor unions.

Was former President Rafael Correa really behind them?

Ecuadorian authorities are still investigating to identify and prosecute all those who engaged in criminal acts during the strike. However, it is clear the government confronted two distinct opposition fronts: unions and the Indigenous movement; and rogue groups which sought political destabilization, presumably backed by Rafael Correa, Moreno’s predecessor and estranged ally who faces several trials over corruption charges.

Nevertheless, both groups were involved in vandalism. Members of the Indigenous movement were caught on tape puncturing truck tires and cutting down trees. To put pressure on the government, they held eight policemen and 27 journalists hostage, seriously beating one of them.

The CONAIE and other protest leaders attempted to distance themselves from violent demonstrators whom they argued were paid by the correísmo to attempt a coup. The military and the intelligence agency also claimed alleged meddling by Correa’s allies. During the protests, Correa, who fled the country in 2017 and now lives in Belgium, called for elections and suggested he would run again for president.

Once the strikes ended, the Prosecutor’s Office ordered the arrest of members of the previous administration, while six opposition lawmakers and officials requested asylum at the Mexican embassy.

Why did the protests escalate so quickly?

The protests revealed the weakness of Ecuadorian political institutions and how poorly prepared the police and the army are after years of funding cuts and undermining reforms during the Correa administration. The end of subsidies was the straw that broke the camel’s back, but violent social unrest was ready to erupt at any moment.

Mauricio Alarcón, director of the human-rights foundation Citizenship and Development, argues Ecuador has been unable to consolidate its democracy. Over the past four decades, administrations have been populist, cronyist, or both as in the case of Rafael Correa. Elected officials have enacted laws and privileges for interest groups at the expense of the rest of society, eroding the rule of law and the separation of powers.

This state of affairs has resulted in two phenomena driving the protests:

Why did Ecuador need an IMF bailout?

During Rafael Correa’s three terms (2007-2017), Ecuador enjoyed an oil boom that allowed the government to expand its size and public spending, which went from 25 percent of GDP in 2007 to a peak of 44 percent of GDP in 2014. Instead of saving for bad times, officials gave handouts, imposed protectionist policies, and created a web of regulations that sapped the private sector.

When international oil prices dropped in 2015, the Ecuadorian government failed to adjust its budget. The fiscal deficit went on to reach 7 percent of GDP in 2015 and 2016.

To pay the bills, the government began selling oil abroad in advance, issuing high-interest bonds on international stock markets, and borrowing money from the central bank. According to José Hidalgo, director at the local Cordes think tank, the latest measure was even more alarming given Ecuador’s dollarized economy.

What has been the impact of the protests?

Eight people died during the strikes, 1,340 people were injured, and 1,152 were arrested  (half of which have already been released).

For the economy, the protests meant more than $1.6 billion in direct lost profits, according to the Commerce Chamber of Quito.

Demonstrations targeted small and medium firms, which fell prey to looting and attacks, as well as public spaces and government buildings, which were destroyed and burned.

The violent backlash forced the government to suspend the austerity measures and reinstate the fuel subsidies while it negotiated with the Indigenous movement and the unions. The Moreno administration is now trying to secure a way to reduce the subsidies and focus aid on Ecuador’s poorest. The labor reforms sent to Congress are also under negotiation with the labor unions.

The suspension of much-needed austerity reforms has taken a toll on foreign investment. Prior to the protests, on September 24, the government successfully auctioned $2 billion’s worth of sovereign bonds on international markets. The ensuing political crisis, however, made the bonds tumble 5.1 percent by October 10.

Jim Craige, head of emerging markets at Stone Harbor Investment Partner, told Bloomberg News that “We have been talking about reforms like this for decades. If [they fail], it will be hard for Moreno to get anything done.”

Indeed, after Moreno compromised on the subsidies the country risk ballooned to the highest level in 2019. Ecuador is again at a difficult juncture, since her future debt issuance would require interest rates of over 10 percent.

What are the current status of the conflict and the dialogues?

On October 16, the government and the Indigenous movement met again, with the United Nations and the Ecuadorian Catholic Church as mediators. The matter is far from being resolved. The Indigenous movement wants to keep the diesel subsidy and just repeal the one on low-octane gasoline for the least well-off. However, this would only save $400 million.

In the meantime, the finance minister introduced the tax-reform bills on October 18. Lawmakers must vote on the proposals—which include tariff reductions and an added value tax on digital businesses—over the next 30 days. Although CONAIE announced on October 23 it was leaving the negotiation table and would prepare its own tax bill, the government continues discussing the reforms with other Indigenous organizations and opposition movements. The government has promised to have an agreement ready by the end of October.

Paz Gómez
October 25, 2019
Previous
Chile Aims to Become Regional Financial Hub
Next
Wyoming’s Pitch to Blockchain Entrepreneurs
You might also like
One of the following
April 14, 2022