What AMLO Bodes for Mexico 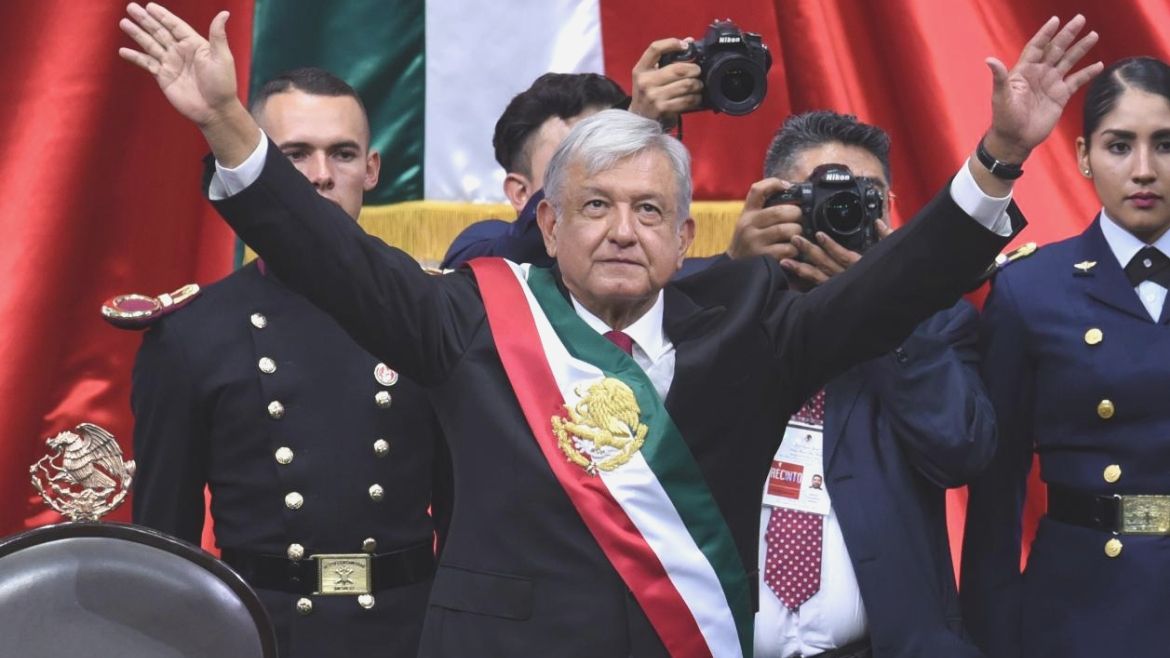 What AMLO Bodes for Mexico

A progressive, AMLO ran on a campaign for increased spending on social programs without tax hikes or increasing the public debt. How he balances those two major goals amid harsher economic conditions will define his presidency.

What are AMLO’s most salient promises and what is he doing to fulfill them?

Although corruption is not limited to the public sector, nine out of ten Mexicans believe that corruption is a common practice among government officials. Occupying the 138th position in the 2018 Corruption Perception Index, Mexico loses at least 2 percent of the GDP—around $ 1.8 billion—every year due to corruption.

Embracing an ambitious promise, President Andrés Manuel López Obrador (AMLO) aims to combat corruption through two approaches. First, he proposed the reduction of bureaucracy and other unnecessary expenses, the revision of contracts and concessions with private firms, and banning people related with illicit enrichment to occupy public positions. Second, he wanted to dismantle drug-trafficking and criminal networks with the creation of a commission to investigate corruption and crim, providing amnesty to victims of extortion, and amending the constitution to prosecute ruling officials if they are related with corruption cases.

Some of the austerity measures that are already taking place are the withdrawal of lifelong pensions to former presidents—close to $2.2 million per year, the auction of government-owned

cars that raised around $3.3 million, and the sale offer of the presidential airplane. Although AMLO is not using the airplane, this year’s national budget contemplates $21 million for its purchase debt, as well as annual saving and maintenance costs. The president also cancelled the construction of the new international airport, which became a critiqued action for setting a bad precedent.

Additionally, the AMLO administration is struggling with the criminal groups (known as huachicoleros) that steal millions of dollars in oil and have performed as drug lords in rural and lawless areas of Mexico for decades. Arguing that this practice caused more than $3.4 billion losses to Pemex in 2018, AMLO blocked oil pipelines to avoid the extraction, triggering resistance and confrontation. Mexican Senator Clemente Castañeda argues that AMLO does not has a solid anti-corruption campaign and signals that he even reduced the 2019 budget to the National Anticorruption System.

2. Reduce poverty through the expansion of social programs

This agenda is already running. At January 2019, AMLO raised the minimum wage by 16 percent and started social programs in two Mexican cities—Guerrero and Edomex—giving 67 dollars per month to 1 million elder people and people with disabilities. He also launched the tax-incentives program at border zones, halving the aggregated-value tax (from 16 to 8 percent), reducing one third of the income tax (from 30 to 20 percent) and establishing an even higher minimum wage in 43 municipalities.

3. Do not increase the deficit, do not add more taxes, promote decentralization

AMLO promised to implement a zero-debt policy, keep a low inflation rate, and do not raise taxes. Considering a broader tax collection, fewer government expenditures, and better financial management, he declared that he was capable to afford his left-leaning agenda. However, AMLO’s debt strategy does not disregard to resort to international stock markets.

In fact, after Congress approval of $291.5 billion for the 2019 budget, Mexican bonds and the peso rallied in December 2018. Then AMLO issued bonds valued in $2 million for ten years in January, where 320 institutional investors participated, and gained $8 million. According to Raymundo Tenorio, economics professor at the Tecnológico de Monterrey, the response from investors was mainly due to the returns rate. But later financial reports and the danger to get lower credit grades—as it occurred with Pemex—could affect Mexico’s position in international markets.

Teacher unions deeply rejected the 2013 education law promulgated by Peña Nieto that requested, for the first time in Mexico, to elementary and secondary teachers approve general exams to maintain their positions. AMLO believes that this legislation impedes full education access in poor zones and promoted educational-institutions privatization. Instead, he seeks to empower unions by giving them more autonomy and to promote free and universal access to elementary and high-school education. He also promised to guarantee the right to access higher education.

In this regard, the government started the program ”Jóvenes Construyendo el Futuro” that aims to give scholarships to 2.6 million young Mexicans and counts with the participation of 39,000 companies. In February 6, the government announced that it needs $315 million more—than the requested amount in the national budget—to afford the program.

During campaign, AMLO proposed to transform the agricultural sector to benefit country men and promote their economic growth with credits and price controls. In a similar vein, AMLO promised to shift the energy industry into a nationalized economic sector that prevails renewable sources. The path that AMLO is taking in this fields, however, remains unknown.

The Mexican president is adopting an unclear policy on the agriculture issue that limits the number of hectares that could receive support from government during winter and has not included negotiation rounds with small and large producers. Looking for energy-price reduction throughout the nation, AMLO announced in February that he will focus on the gas-based energy rather than wind or solar sources.

Is the Mexican economy heading toward a crisis? What is the shape of the state’s finances?

Mexico’s national debt grew 400 percent between 2007 and 2017, and it continues its upward trajectory towards $1 trillion. According to the IMF, the nation’s deficit will be around -2.5 percent of the GDP in 2019 and 2020. AMLO has promised to turn debt down, despite his expensive projects—for example, he wants an $8 billion Mayan Train to archeological sites—and his commitment to not increase taxes.

What are the grades for Mexico’s sovereign debt? Are lenders drying up?

Pemex: the state-owned oil company has been downgraded, with a Fitch grade of BBB-.

According to these agencies, the probability that Mexico does not meet her debt liabilities is fewer than 5 percent. However, a regional analysis from Moody pointed out that Mexico’s debt maturities for the end of this year amounts $10 billion, so refinancing them in 2020 would be a challenge given her low credit quality. Further, rating agencies will maintain aware of the new administration’s policies and budget decisions, particularly related to the inflation targets, oil prices, and the exchange rate.

Violence is a huge problem in Mexico. What will he do to tackle that issue?

Following his government plan, AMLO presented the National Security Strategy to the Congress on February 1st, 2019. Although the government has not provided further details on how it will achieve the objectives, its key action points are:

AMLO proposes to create a National Guard—led by the armed forces and himself—to articulate three-level government’s security strategies. The reform would also seek for standardization in training and payments.

AMLO plans to identify families and communities that make a living from illicit activities and propose them to engage in alternative economic activities—that have not been explained yet. His strategy also contemplates awareness campaigns on the consequences of committing crimes and a better law enforcement.

By recovering public spaces and promoting the creation of neighborhood networks, AMLO argues that would combat crimes that affect society the most and threats people in a daily basis.

To improve law enforcement and the response from police, public expenditure on security would be mainly allocated for infrastructure modernization and training.

Already in action, this plan has three stages: improve intelligence systems to avoid oil robbery, identify the way in which criminal-groups operate, and their imprisonment.

The AMLO administration would provide more authority to the Financial Intelligence Unit to track money and investigate inconsistencies and would create the Financial Guard as a dependency of the Attorney General’s office.

Security forces would permanently control highways with high incidence of assaults, and the government would install arm detectors along the roads, as well as other prevention mechanism.

AMLO has only said that he will stablish an interinstitutional strategy for this purpose and will enhance arms-license track.

Security Secretary Alfonso Durazo estimated that the security strategy proposed by AMLO would cost around $314 million on the first year of implementation and would increase next years.

According to security analyst Alejandro Hope, this national strategy seeks militarization. ”The core of the proposal is to make the participation of the armed forces permanent in the public-security tasks, ” Hope told to the BBC.

Mexicans are worried about concentration of power. Are their fears justified with AMLO?

Aside from the fear of militarization, another major concern is the lack of judicial independence since AMLO proposed to reform the justice system. The president suggests adding trust controls, gender quota, and steady turnover of judges; to delegate the appointment of judiciary counselors to the Senate; and to reduce work force and salaries. In response, judges and officials from the judicial system have demonstrated against these measures.

AMLO also called for a national referendum to determine if former presidents related with corruption should be prosecuted or not. Civil society organizations, such as Mexicans Against Corruption, have claimed that this referendum is a demagogic tool that takes power out from the judiciary. Furthermore, on March 12, 2019, the Senate—with a ruling-party majority—appointed Yasmín Esquivel, wife of AMLO’s preferred contractor, as the head of the Supreme Court, although some senators signaled that there could be interest conflicts if she was elected.

Is there an end in sight for Mexico’s war on drugs?

During a press conference on January 30, 2019, AMLO stated that Mexico’s war on drugs was over and that his administration is seeking peace. The president argues that public security and law enforcement improvements would discourage criminal groups to continue their operations. The creation of the commission to investigate crime and his commitment of amnesty will accompany his strategy.

The plan to combat organized crime includes the participation of civilians and armed forces, while limits the role of the Police. According to professor Günther Maihold, it is risky to disregard the police because their main objective is to protect individuals—as it is not the case of the military, whose main objective is to protect the nation. Therefore, Maihold warns that there could be human rights violations.

AMLO’s stand on war on drugs hinders Mexico’s relation with the United States, since fighting drug-trafficking and organized crime is a key aspect of the bilateral agenda. Larry Rubin, the Republican Party representant in Mexico, requested AMLO to reinforce his action in these affairs. The United States provides a significant financial contribution to tackle these crimes, Rubin said, and the maintenance and raise of this aid depends on Mexico’s collaboration.

Paz Gómez
March 27, 2019
Previous
How the Fintech Revolution Could Liberate Us
Next
The Hidden Cost of a Money-Laundering Crackdown
You might also like
One of the following
April 14, 2022