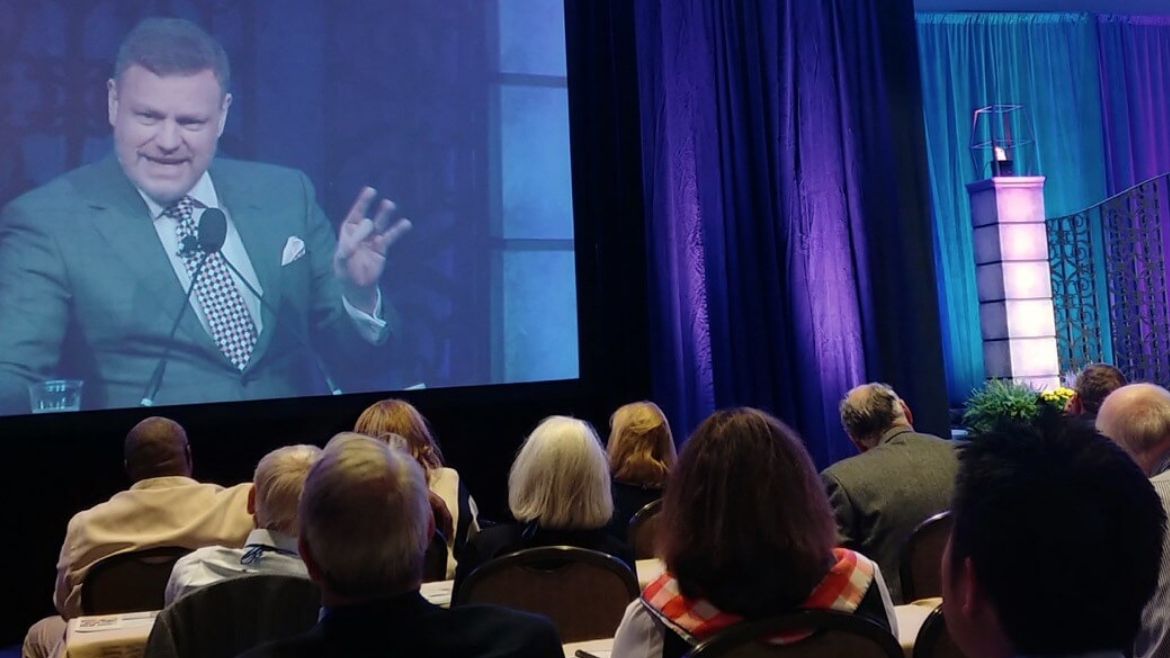 Attendees at the New Orleans Investment Conference (NOIC) are no strangers to doomsayer proclamations. However, commentator and author Mark Steyn upped the warnings on November 4 and said indebtedness was America’s “suicidal decadence.”

A Canadian who now lives in New Hampshire, Steyn was the four-day event’s closing keynote speaker. He expressed his condolences regarding the late Charles Krauthammer—a longtime speaker at NOIC—and then he described the disagreement the pair had over US national debt.

In the roughly one-hour presentation, including audience questions, Steyn also expressed disappointment towards President Donald Trump’s lack of interest in the national debt. Steyn admitted that Trump was probably just following the interests of constituents, but he remarked that a debt of this scale had never been surmounted in history: “These are not normal times [and the debt] is corroding the American soul.”

Not only is the official federal debt nearing US$22 trillion, there are mounting state and local debts and many tens of trillions of unfunded liabilities at all levels. Steyn added that other forms of debt are piling up as well, such as $1.5 trillion in student loans.

Since so much of US indebtedness is in government, Steyn believes this pattern is warping the economy: “The most prosperous place to be is near government … and we’re spending it on nothing but bureaucracy and bloat.”

Adding to the problem, he explained, was the fact that there would be no one to pay it off, given a swiftly aging population. “Demography is destiny, and importing foreigners [as a solution] is not working out well.” He gave examples of European nations that were voluntarily displacing themselves in their own homelands, and he warned the pressure from the Third World would only rise.

Meanwhile, he said, “phony phobias” and “boutique demographics” are distracting the US populace. “We face so many big questions, but we talk about smaller and smaller things.” In particular, he characterized gender politics, such as disputes over transgender bathrooms, as laughable and irrelevant.

“I’m a phobia-phobe, because all these phony phobias prevent us from having an honest addressing of the challenges that face us.”

Steyn was not alone at NOIC in calling out severe indebtedness as an addiction for the United States. Conference CEO Brien Lundin noted that rising interest rates would come back to bite government, individuals, and corporations alike, since they took on debt so readily in the decade of easy money since the Great Recession.

Peter Boockvar, one of the panelists and guest speakers, added in an event interview that, combined with higher labor costs, higher interest payments could bring on another bear market for the United States. He titled his talk “Buckle Up.”

The NOIC drew about 1,000 attendees—with about half sitting on Steyn’s presentation—and event organizer Emily Coia said the total was up about 10 percent on previous years. Attendees came from as far afield as Australia, Fiji, and the United Kingdom.

Coia and Lundin have sought to add to the event’s gold-bug reputation—with an emphasis on mining and precious metals—and bring in alternative investments such as agriculture and real estate. This diversification appears to be paying dividends with a younger crowd attending this year. They learned from the likes of Robert Kiyosaki, author of Rich Dad, Poor Dad; Russell Gray and Robert Helms of the Real Estate Guys Radio Show; and Juraj Bednar of Paralelná Polis in Slovakia. Bednar outlined what cryptocurrencies offer for those who reject conventional currencies and banking.

Previous
Whatever Happened to Charter Cities in Honduras?
Next
Fear of Crypto Limits Uruguay’s Blockchain Overtures

Fergus Hodgson
November 5, 2018
Previous
Whatever Happened to Charter Cities in Honduras?
Next
Fear of Crypto Limits Uruguay’s Blockchain Overtures
You might also like
One of the following
April 14, 2022