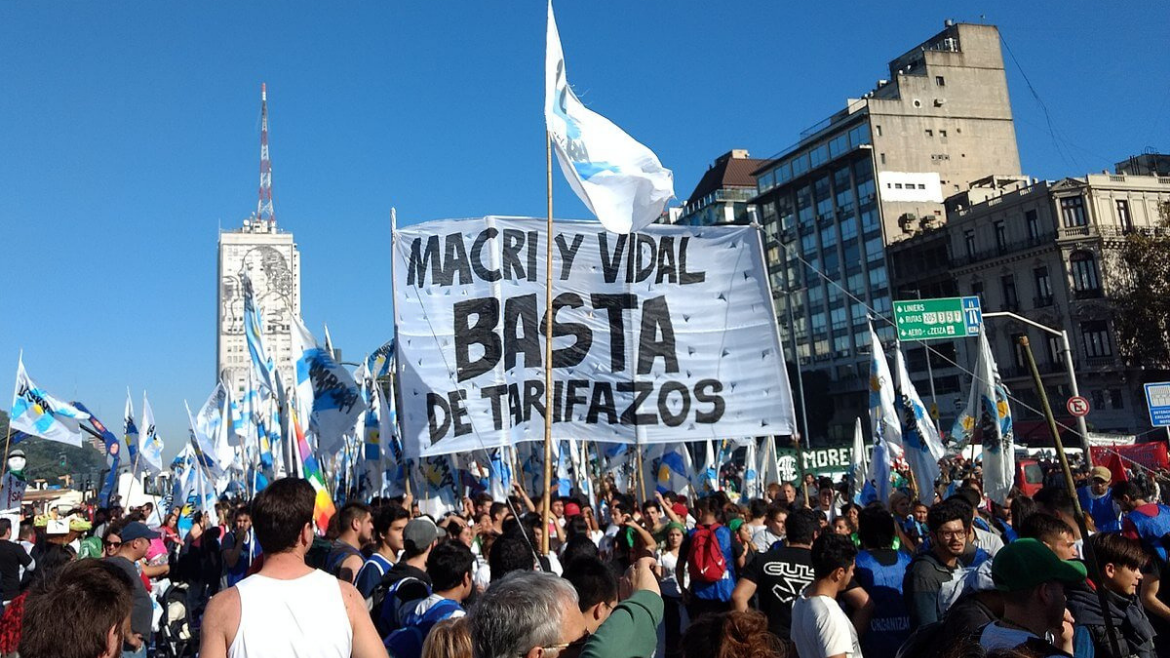 A public demonstration in May 2018 against hikes in public utility bills, which include home-heating gas. (Banfield)

As if Argentina’s economic problems were not bad enough with currency devaluation and stagnant growth, the Southern Cone nation has a rising default crisis. Embattled President Mauricio Macri of the Let’s Change coalition (Cambiemos) has failed to meet monthly payments to Bolivia, given restraints of the austerity plan signed with the International Monetary Fund (IMF).

Argentina’s debt with her neighbor over the provision of natural gas is piling up. Over $225 million is overdue, and another $130 million came due on August 10 (the day of this article’s release). Argentina is making no motions to pay, however, straining trade relationships.

Every day, Argentina imports 20.9 million cubic meters of natural gas from Bolivia, but the last payment was in May of this year. Luis Sánchez, the Bolivian energy minister, has warned that interest rates and penalties may apply if Argentine representatives fail to uphold their end of the deal, with both countries contracted until 2027.

Two Sides of the Story

Argentine Ambassador to Bolivia Normando Álvarez claims red tape is to blame for the delay in payments. In March, Argentina’s state-owned energy company changed its name from Enarsa to Argentine Energetic Integration S. A. (Ieasa), as part of a business restructuring plan. The transition involves a shake-up in management and finances, as well as the sale of secondary assets to raise up to $1 billion in funds for new projects.

Argentine newspaper La Nación reports that the change of authorities at the Energy Ministry and Ieasa complicated payments to Bolivia. The paper also quotes industry sources claiming that the Finance Ministry is struggling to come up with enough budget cuts to meet 2018 financial goals.

Argentina reached out to the IMF in June for help to weather her economic crisis and agreed to a $50 billion loan. To satisfy the IMF, the Macri administration committed to reducing the government’s budget deficit from 3.9 percent of GDP in 2017 to 2.7 percent this year and 1.3 percent in 2019.

Either way, Argentina’s failure to comply is breeding impatience among Bolivian officials, who are hinting at renegotiation.

Chile Caught in the Middle

The Bolivian Energy Minister assures that his country has kept fulfilling Argentina’s daily gas orders despite the overdue bill. In fact, Sánchez claims gas production in Bolivia is enough to offer even more gas to Argentina. However, he argues that a larger demand would require a price renegotiation, since Argentina is currently paying Chile a two-thirds higher price per unit.

On June 27, despite the public statements of an inability to complete the transactions, Ieasa arranged additional contracts of gas from Chile during the high-consumption winter season. Álvarez explained that before signing this agreement, Argentina had asked Bolivia to increase the gas provision, but did not receive an official response. The bilateral relation has essentially been characterized by disagreements and lack of communication since Argentina tried to modify the terms in March 2018.

Given Bolivia’s unresponsiveness, Argentina sought to meet her looming winter’s peak demand with a faster deal with Chile. In December 2017, the two countries signed a two-way trade of gas. Although Argentina ended up paying more for the Chilean provision during the winter, in exchange it agreed to send a shipment of surplus gas back to Chile in the following months.

The Argentine-Chilean agreement can ultimately interfere with the Bolivian-Argentine deal that contemplates an increase in the daily trade of gas, up to 27 million cubic meters.

Argentina reinforced her commercial bonds with Chile on July 20 when both countries’ energy ministers agreed to trade shale gas beginning October 2018. The Macri administration has been working to improve existing infrastructure to become self-sufficient in natural gas and even a net exporter. The government is particularly promoting the development of a field in Neuquén province, where Argentina has an important unconventional gas reserve trapped in fine-grained sedimentary rocks, also known as shales.

Bolivia on the Ropes

The move to decrease reliance on Bolivian gas can be traced back to late 2017, when Brazil and Argentina expressed intentions to cut back on imports from Bolivia, considering that both neighbors were developing their own gas-production capabilities.

This shift toward self-sufficiency and a more competitive international gas market has left Bolivia in a vulnerable position within a long-term contract.

Three factors are undermining Bolivia’s role as the leading gas producer in South America, according to Mauro Chávez, an analyst with the energy consultancy firm Wood Mackenzie: (1) cheaper natural gas extraction from Brazil’s sub-salt fields, (2) shale gas extraction from the Vaca Muerta deposit in Argentina, and (3) liquefied natural gas (LNG)—natural gas cooled down to liquid form that can be stored for land or waterway transportation. Currently, Bolivia can only export natural gas through pipelines to Brazil and Argentina.

Bolivia is increasingly a least-favored source of gas, because South American countries can import LNG by ship at competitive prices. A rapidly expanding market and new extractive technologies, such as fracking, are putting a downward pressure on gas prices. For instance, this year Argentina acquired 58 LNG carriers and paid around $7.80 per million Btu.

Although Bolivia does not appear to be in a strong position to negotiate higher prices, at least for the meantime Argentina must still rely on her northern neighbor to meet current demand.  “The population grew and GDP grew too, two factors that raise energy consumption,” explains Alieto Aldo Guadagni, a former energy minister.

Incumbent Argentine officials, however, are doing everything in their power to avoid long-term payments. For instance, they preferred to call for short-term tenders to purchase LNG during 2018, instead of arranging all of them in one go. Argentina will receive 58 LNG carriers by September, which is over 10 carriers fewer than the amount expected for this year. The Macri administration has acknowledged that it will not be able to afford the expected number at current prices without increasing the deficit.

Bolivia is growing accustomed, though, to Argentina’s poor record of paying debts, since this is hardly the first time, including in the case of gas imports. When Macri took office in 2015, Bolivia complained over a three-month payment delay, and Argentina again cited bureaucracy as the cause. Back then, the Morales administration, an ally of the Kirchner coalition that Macri defeated, even threatened to cut the gas supply.

Paz Gómez
August 10, 2018
Previous
Nazi Past Haunts South America’s Penchant for Impunity
Next
Latin-American Nations Fall Behind for Property Rights
You might also like
One of the following
April 14, 2022