The App to Catalyze Next-Generation Recycling in Chile 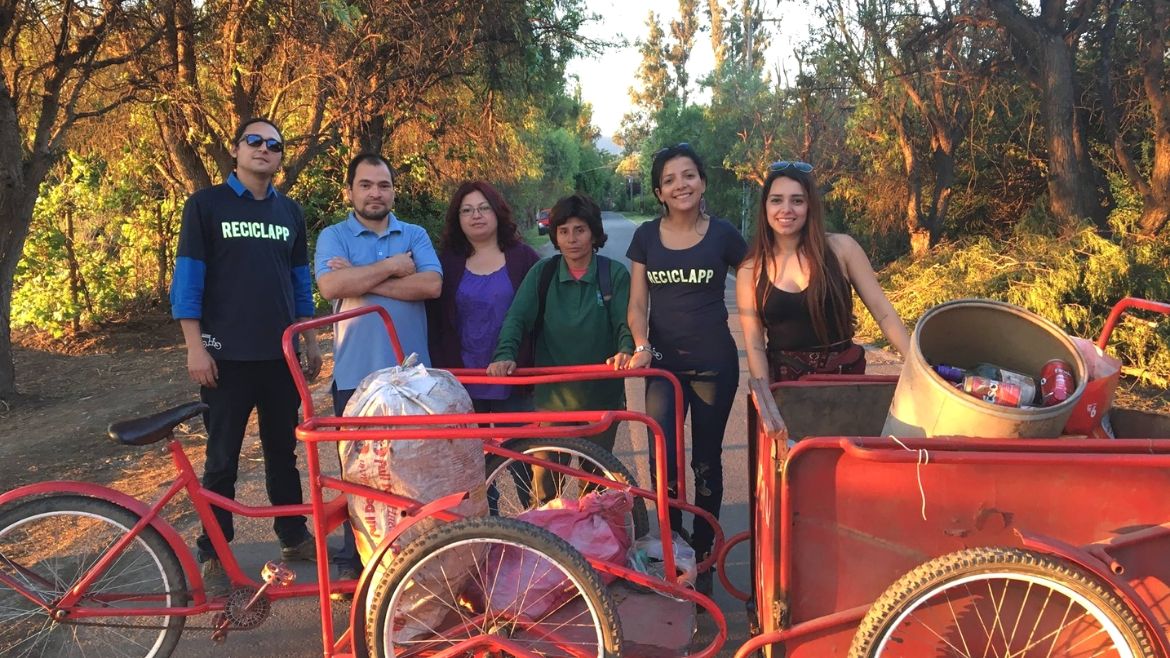 The startup aims to give recyclers better access to reusable products and to promote recycling in Chile. (Reciclapp)

The App to Catalyze Next-Generation Recycling in Chile

According to Waste Atlas, Chile generates 456 kilograms annually of trash per capita. That means each inhabitant produces 1.25 kilograms of waste per day, and Chile is proportionally the largest waste generator in Latin America.

With these figures, one can only ask where all that trash goes and about the recycling habits of Chileans.

In Chile, the garbage that is not recycled has one of three destinations: (1) a regulated landfill, (2) an illegal dump, or (3) none of these, which means on the streets or dispersed across the landscape.

Regulated landfills are scarce and don’t offer a long-term solution. They operate under the assumption that some of the trash will biodegrade and break down eventually, freeing up space for more.

The reality begs to differ. Landfills fill up quickly, and cities must then expand their size or open new ones, because biodegradation is usually a very slow process — extremely slow in some cases! For instance, some hot dogs still look like hot dogs decades later, and you can even read some newspapers printed in the 1950s, according to William Rathje, archaeologist and author of Rubbish! The Archaeology of Garbage.

As for Chileans’ recycling habits, let’s say there is a lot of room for improvement. Their minister of the environment says that only 4 percent of citizens recycle, and 26.9 percent report that they do not know where to take their materials to be recycled.

Still, many companies pay for reusable materials. They tend to get these recycled items from waste pickers on the streets, which means the pickers face medical risks, and the items are in less than stellar condition.

Cristian Lara, an engineering student in Santiago, and some of his friends realized in 2015 that there was a vast disconnect between these collectors and those companies. At the end of an event they attended, they watched 300 bottles being dumped all at once. They already knew how hard the waste pickers’ job was, since one can often see a person going through the content of a garbage bag taking what can be reused and sold.

That same year, Lara and three more college students (now seven associates), created Reciclapp, “the Uber of recycling,” as they describe it, a startup that makes the job for street collectors more efficient and improves their job conditions greatly. For individuals at homes, restaurants, and industries, Reciclapp makes recycling very simple and even offers incentives like prizes and discounts.

The app is available in Play Store and App Store, and users only need to add their location and follow three more steps: (1) when they have products made of glass, can, plastic, paper, or cardboard, they declare the amount in the corresponding category, (2) select the date and time of day they want it to be collected, and (3) wait for the recyclers to pick it up.

With that data, the Reciclapp team create efficient routes for the 200 collectors working with them in three cities: Santiago, Valparaiso, and Antofagasta. They also have provided them with storage facilities, so the collectors don’t have to take the materials home and can avoid health risks.

Reciclapp doesn’t take any percentage of the collectors’ profits, and they think that very soon they will be able to offer them a base salary, plus an incentive pay for extra work, since local governments and some private businesses have signed contracts with Reciclapp in order to optimize their recycling processes.

Teaching Chileans to recycle and help them create the habit is a long-term process, but Reciclapp and other initiatives with that goal will have a broader opportunity to do so with the new Promotion of Recycling Law (Ley de Fomento al Reciclaje). It allocates over US$3 million to support projects dedicated to reducing waste and improving recycling.

Chile has a cleaner future ahead.

Guest Author
October 29, 2017
Previous
Fraser Institute Freedom Ranking Belies the America I Know
Next
Ecuador’s Tourism Campaign a Populist Distraction
You might also like
One of the following
April 14, 2022