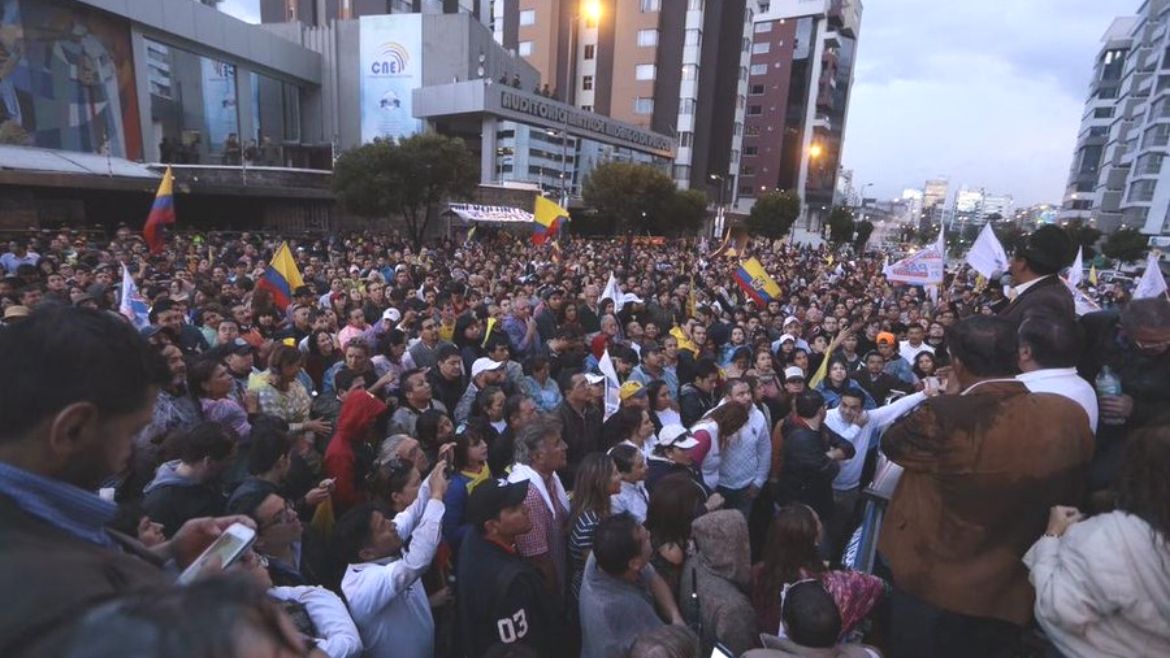 People have taken to the streets in several Ecuadorian cities to protest the current regime. (Ecuavisa)

Ecuadorian citizens have been protesting for the past 72 hours, amid complaints of electoral fraud and delayed election results for the presidential race.

On February 19, Ecuador went to the polls after a contentious campaign in which the ruling leftist Alianza País (AP) party faced challenges from seven opposition candidates pursuing a common promise, a change of course for the country.

Without an explicit announcement, Juan Pablo Pozo, president of Ecuador’s National Electoral Council (CNE), said on Tuesday that it was “impossible to reverse the trend” of the vote, implying that a runoff on April 2 was likely.

Finally, at noon on Wednesday the CNE declared a second round between Lenín Moreno, the ruling party’s candidate, and Guillermo Lasso, the front-running opponent from the right-wing CREO party. The president officially announced the runoff later that night.

According to Article 89 of Ecuador’s Democracy Code, in order to win a first-round election a candidate needs at least 40 percent of valid votes — abstentions, null, or blank votes are not counted — and a minimum 10 percent lead over the candidate in second place. Otherwise a second round between the two top candidates must be held, and the one with an absolute majority wins.

On Sunday night, the CNE had already counted more than 80 percent of the ballots. The results put Moreno in first place with around 39 percent of the votes, and Lasso trailed him with approximately 30 percent — thus indicating the likelihood of a second round.

Yet, while there were only 20 percent of the votes left to count, Juan Pablo Pozo asserted that they needed at least three more days to reveal the final results. Curiously, Ecuador is debuting a new system of vote-counting that Pozo has repeatedly assured the public would be more accurate and efficient.

The prolonged delay in releasing results, in addition to other voting irregularities, has raised suspicion among the populace.

Local newspaper La Hora reported that on Sunday several social-media users from different provinces posted about the appearance of electoral kits with ballots already marked with votes for the ruling party. Ecuadorian authorities subsequently ordered the newspaper to delete the story.

Moreover, according to free-speech watchdog Fundamedios, there was an attempt to hack the investigative-journalism website Fundación Mil Hojas.

An Ecuadorian citizen living in Miami who tried to cast his vote at the embassy told Diario El Universo he was prevented from voting because records showed that he was still living in Ecuador, even though he had been registered with the embassy for the past six years. (Ecuadorian citizens are only allowed to cast their votes from the parishes in which they officially live.)

Others have reported that names of deceased persons were on the electoral register. Renowned journalist Alfonso Espinosa said the name of his father, who died 26 years ago, has suddenly appeared in the register again.

Moreover, Ruth Hidalgo, head of the Citizen Participation Corporation (CPC), a civil organization responsible for supervising the elections, reported that the military had obstructed its volunteers during the scrutiny process in several provinces of the country. In a possibly related attack, CPC’s website was hacked shortly before the results were finally released at 9:30 p.m.

In an unusual move, the CNE did not deliver preliminary regional results as it has done historically. Instead they proceeded to the ballot scrutiny process, leaving Ecuadorians in the dark. At around 9 p.m. local time, with 60 percent of the ballots counted, the electoral body’s website mysteriously stopped working.

Perhaps most alarming was the account from witnesses who said that early Monday morning unauthorized vehicles had entered the CNE offices. Moreover, several people found ballot papers thrown away on the streets. That is to say, there was an apparent security rupture regarding the custody of the electoral records.

“I found ballot papers thrown away. I went to the offices of the CNE in Guayaquil to denounce it, and our very own authorities did not know what to do with them. They have treated our votes as if they were bags of candy,” stated Joselo Andrade, a member of CREO.

In response to the accusations, the ruling party countered by saying that, if anything, they are the real victims of fraud. President Rafael Correa posted a series of tweets on Tuesday claiming that the delayed results were for more populated areas in which his party had a much stronger lead.

During this first round of elections, Ecuadorian citizens have demonstrated the power of an organized civil society and its importance as a watchdog against government abuse. Demanding prompt election results and answers for other electoral irregularities, people have gone out to the streets to demonstrate they want a change, and that they want their democracy to be respected.

Were it not for the reports that citizens shared through social media regarding corruption and fraud, the country would have no choice but to deal with four more years of socialism.

Paz Gómez contributed to this report.

Previous
Learn from Populists, Beat Them at Their Own Game
Next
Progressives Are a Lost Cause

Guest Author
February 23, 2017
Previous
Learn from Populists, Beat Them at Their Own Game
Next
Progressives Are a Lost Cause
You might also like
One of the following
April 14, 2022