E. B. Tucker Pens Gold Primer Fit for Our Times

Why the Shiny Metal Is Pertinent in Twenty-First Century

E. B. Tucker has written an accessible book that makes the case for precious metals amid inflation and economic turmoil. (Zlato.cz)

E. B. Tucker Pens Gold Primer Fit for Our Times

Do you hear and see “buy gold!” often and in suspiciously worded advertisements? Gold is ripe for such appeals. It is a symbol of wealth, but the layman knows little about it for investment and wealth protection.

One cannot blame him. The variety of applicable strategies and available stocks is enough to make a man cross-eyed. This is one reason why, for the past five years, I have hosted the Gold Newsletter podcast and sought to demystify gold.

E. B. Tucker is one guest who has cut through the smoke and mirrors to make precious-metals investment understandable. His May 2020 book, Why Gold? Why Now? (236 pages, five hours), makes a compelling case that this era of unprecedented, worldwide monetary expansion is precisely the time to utilize precious metals. His subtitle indicates, albeit with a touch of hyperbole, he believes there is a war against your wealth and that gold can defend against it. 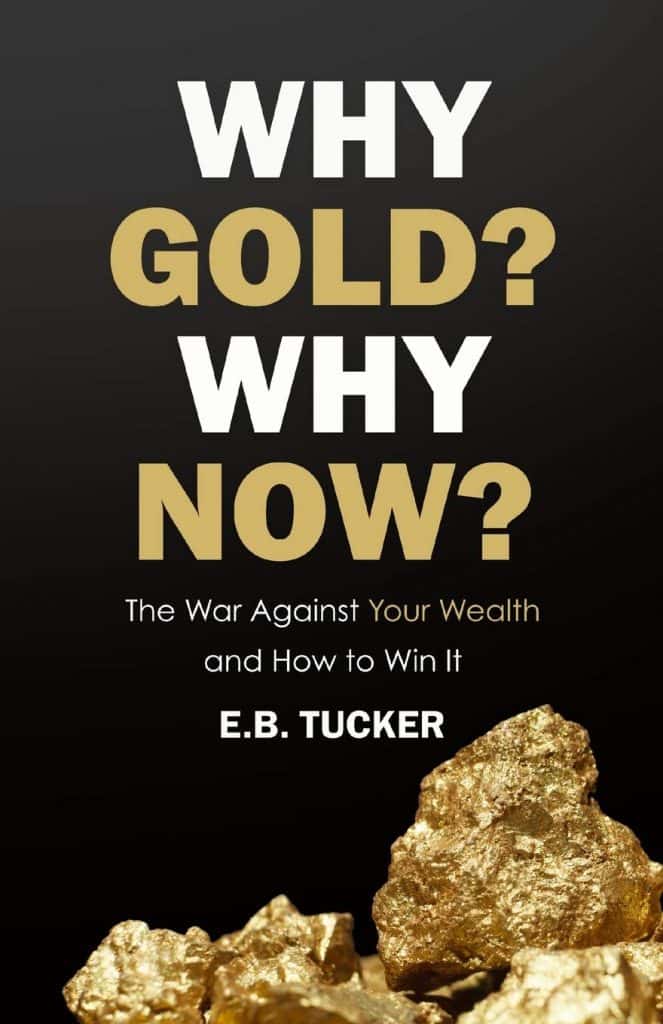 Divided into three sections, Why Gold? Why Now? is a primer targeted at the newbie. Summarized, the sections address (1) history, (2) today, and (3) an action plan. Gold bugs, particularly those who agree with Tucker’s optimism regarding a long-term bull run, would best skip the first section.

The second section injects spice by claiming this time is different. For so long, many of us have heard about the last days of the US dollar. Yet it remains the world’s reserve currency, and measured inflation remains in the low single digits. (Keith Weiner of Monetary Metals explains how the loss of asset value, at least in terms of returns, is another matter altogether.)

Tucker contends that unsustainable fiscal trajectories, laid bare by COVID-19 lockdowns, are worse than ever before and are driving fiat currencies to the edge. In addition, he argues bitcoin is neither the answer to fiat currencies nor a substitute for gold. Tucker contends bitcoin, whose volatility is evident, is likely a government-planned venture to shepherd people into traceable digital transactions. That means no escape from taxation, inflation, and negative interest rates. Although I had heard murmurings before, Tucker swayed me towards his view.

The real meat and potatoes, however, comes in the final section: the how-to. Tucker addresses the gamut, from physical coins to ETFs to junior-mining stocks, along with security concerns. He acknowledges, though, his membership of the board of Metalla Royalty & Streaming. This affinity for royalty companies is obvious, and they garner disproportionate attention. This is where gold bugs could find value, given a deep dive on this topic—unlike anywhere else in Why Gold? Why Now?

Those two ingredients, the bitcoin assessment and the streaming explanation, make the book fresh and distinct. In addition, its arrival right as COVID-19 panic was gathering steam made it pertinent. Beyond a few years, though, Why Gold? Why Now? will stand as an accessible, concise book for those wishing to make a start with gold.

Fergus Hodgson
May 25, 2021
Previous
How to Package Finance for Social Media
Next
Why Google Picked Uruguay