For years, Honduras’s version of charter cities, the Employment and Development Economic Zones (ZEDEs), seemed destined to never get off the ground. Like so many projects in Latin America, politics and cronyism got in the way. That is why Roatán Próspera took everyone by surprise when it launched in early May 2020.

Against all odds and in the midst of a global pandemic, the first ZEDE sees the light after more than seven years of public and private efforts. It seeks to create, over the next decade, a special economic zone in Roatán, a 32-square-mile island and tourist destination in the Caribbean. Unlike mainland Honduras, the island, a former British colony, boasts a lower crime rate, and its 60,000 residents speak primarily English.

What is the legal status of Roatán Próspera and how can it guarantee continuity?

The Próspera ZEDE was legally established on December 29, 2017, as a public-private partnership with a renewable 50-year term. In doing so, the government of Honduras allowed Honduras Próspera LLC, incorporated in Delaware, to promote and organize the 60-acre parcel of land that it acquired on Roatán.

The technical secretary and the Council of trustees share rule-making authority for the Próspera ZEDE. They function similarly to a municipality council, constituted by nine natural persons entitled to vote: a technical secretary, who is the highest-level executive official, a secretary, a treasurer, and six other council trustees.

Articles 294, 303, and 329 of the Honduran Constitution and the ZEDE Organic Law allow the semi-autonomous jurisdiction to develop its own regulatory and administrative institutions. Reform or repeal of the ZEDE law needs two-thirds approval from the Honduran Congress.

Moreover, once a ZEDE’s population exceeds 100,000 inhabitants, the government has to hold a referendum on amendments..

How does Próspera’s governance model work?

“Próspera put together the best of both worlds: the corporate and the democratic decision-making processes,” Brimen told Econ Americas.

Every ZEDE has a charter and bylaws, akin to a constitution, that define the legal framework that city rules and ordinances must be consistent with. Nevertheless, all ZEDEs are subject to Honduran criminal legislation. The Committee for the Adoption of Best Practices (CAMP), a board of experts appointed by the Honduran government, oversees the ZEDE’s management and compliance.

Roatán Próspera’s governance includes oversight and consent mechanisms. For instance, to amend the ZEDE’s charter, two-thirds of council members must agree, as well as the CAMP.

Residents have the right to vote for the technical secretary and four council trustees once Próspera reaches high population density, as defined in its charter. Taking a page out of Liechtenstein’s mixed political system, they can also repeal rules through a referendum and amend the charter. Próspera is also developing an e-governance system with the support of the team that worked on Estonia’s..

How does Próspera secure quality of life for residents?

The Próspera ZEDE has the legal status of a municipality. As such, it must provide education, health, security, and infrastructure.

Próspera will have an ombudsman, an independent auditor that ensures residents have access to justice, education, health, and other basic services. The ombudsman has the authority to initiate a probe after 10 residents file a complaint of rights-infringement within the ZEDE. When the ZEDE reaches 1,000 inhabitants, the CAMP appoints the ombudsman. Afterward, the ombudsman is selected through referendums.

As part of its partnership with the national government, Próspera agreed to set a minimum wage in US dollars that is 10 percent higher than the Honduran one. Employers contribute 8 percent of gross compensation to a privately managed retirement fund, which allows withdrawals in cases of emergencies or arbitration orders.

The ZEDE will have its own security system and is legally entitled to three sources of security provision:

According to Próspera Technical Secretary Tristán Monterroso, community organizing will play an important role to combat crime and create a safe environment for doing business.

There are three channels to promote infrastructure development in Roatán:

According to Brimen, the first community initiative is already underway. With Próspera’s funding, residents from a Roatán locality with no access to running water built the pipelines and now run a social enterprise that provides the service. When the coronavirus pandemic disrupted the economy and left some residents unable to pay, the initiative set up a barter system to keep going. 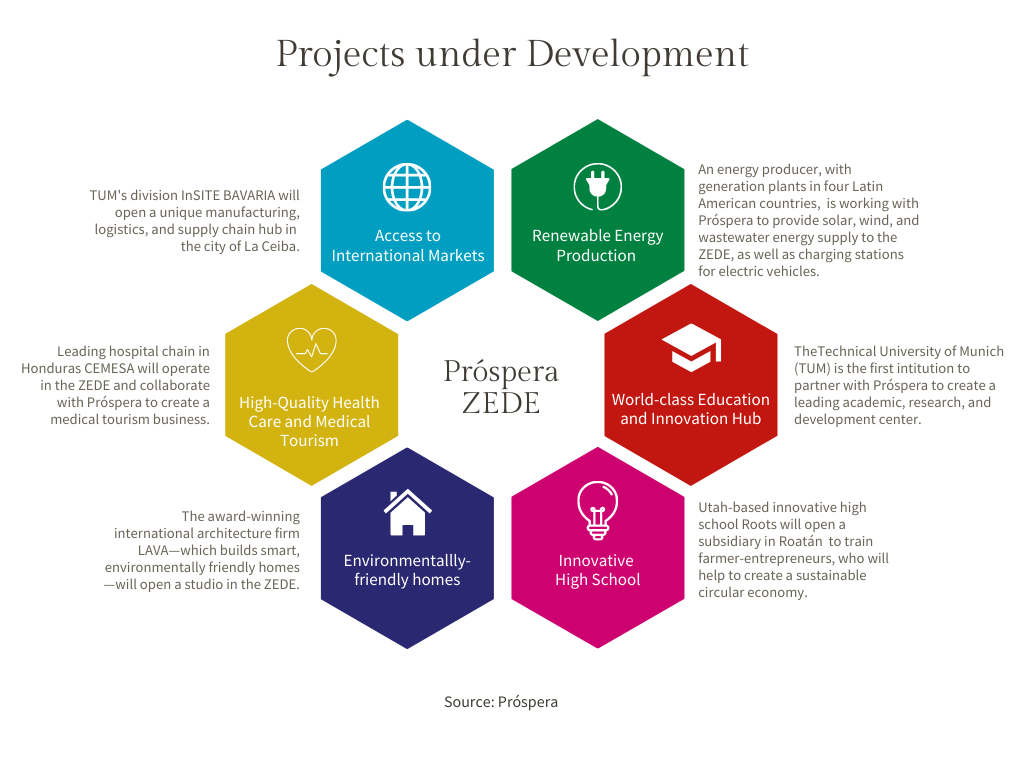 How will Próspera address conflict resolution?

In late 2019, Próspera contracted the Próspera Arbitration Centre (PAC) as the default arbitration-services provider for the ZEDE. Unless stipulated otherwise, the PAC decides all private disputes in the ZEDE, including labor disputes. (The Honduran judicial branch will set up special courts for matters outside arbitration, such as criminal, family, and childhood issues.) Arbiters that pass through stringent selection procedures provide binding and non-binding arbitration.

The PAC operates a straightforward e-filing system for submitting a notice of arbitration or documents related to a pending case. By default, PAC’s proceedings are public, and their decisions, based on common law, establish precedent..

How can one obtain residency in Roatán Próspera?

There is an annual $260 residency fee for Hondurans and $1,300 for foreigners that employers can pay on behalf of employees. Additionally, they must comply with Honduran immigration laws.

Prospective residents must sign an “agreement of coexistence,” a legally binding contract between the resident and Próspera that includes committing to the arbitration system. They also need to buy general liability insurance for civil liability and be subject to a criminal-background check.

Próspera will offer electronic residencies akin to Estonia’s but without voting rights. There will be permits and fees for tourists, business, and temporary visitors. Applications are subject to know-your-customer and anti-money laundering policies..

What are the investing opportunities in Próspera?

Once individuals and companies become residents, they are free to transact in any currency within the ZEDE. The e-governance system will allow for streamlined businesses incorporation, and a blockchain-based land registry is in development.

Forming an entity in Próspera costs between $540 and $1,840, including liability insurance. There are three main taxes: on income (5 percent for individuals, 10 percent for companies), on retail sales (2.5 percent), and on land value (1 percent). Most common permits cost between $50 and $200.

Próspera is offering limited presale reservations for housing units that will become a boutique hotel. Early purchasers will be able to express their design preferences.

“Whatever Happened to Charter Cities in Honduras?” by Paz Gómez

Paz Gómez
July 2, 2020
Previous
Five Ways Cryptocurrency Critics Are Right
Next
The Latin American Integrated Market (MILA): A Misnomer?
You might also like
One of the following
April 14, 2022