Why Financial Genius Will Fail Again

Why Financial Genius Will Fail Again

Some human shortcomings appear to be baked into our nature and with us for as long as we can foresee. A combination of these biases led to the explosive rise and humiliating downfall of the Long-Term Capital Management (LTCM) hedge fund in the 1990s.

Roger Lowenstein’s enthralling and detailed account, When Genius Failed (2000), is a reminder of what went wrong and why it will inevitably happen all over again. Since the four-year drama took place more than two decades ago, little appears to have changed except that the moral hazard from bailouts is now ever-present.

LTCM made extremely leveraged bets across bond markets. Initially, these paid for themselves handsomely, exceeding 40 percent returns after fees in the second and third years. The founders, however, got lost in their sophisticated mathematics and failed to account for human unpredictability and irrationality. Succumbing to arrogance, they also strayed from their fields of expertise and overlooked how they were generating value: as a de facto insurer of market risk. Predictably, stormy weather wiped out the insurer.

In our era, federal bailouts are so widespread and generous, LTCM’s bailout by fellow banks—brokered by the Federal Reserve in 1998—seems quaint. Back then, the mere presence of the Fed, even if it did not provide liquidity, was controversial and not something to boast about. That restraint and preferred light touch have fallen by the wayside. Major financial players can now bank on Fed support if they run aground, be their woes self-inflicted or not. 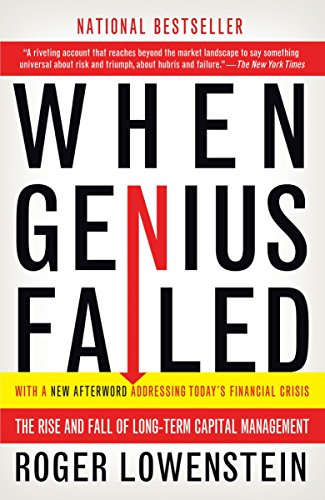 When Genius Failed will be candy to the financial enthusiast.

What makes the story particularly jarring is that the LTCM characters, such as Robert Merton and Myron Scholes, really were some of the most intellectually gifted men of their generation. Their gifts, however, did not exempt them from the cognitive biases that got the best of them.

They saw themselves as nigh invincible—winning without the need for explanation—and even shrewd financial players leading major companies such as UBS took the bait. The former demonstrated overconfidence bias. The latter trusted in authority beyond what was justified and chased the trend of LTCM’s rise. Yes, fear of missing out (FOMO) also rears its ugly head in finance.

Even though the book has sold well and the LTCM story gradually leaked out, humans struggle to learn from history, even recent history. As Professor Matthias Weber at the University of St. Gallen has observed in experimental research, neither investor experience nor sophistication eliminates financial bubbles.

When Genius Failed will be candy to the financial enthusiast, capturing the excitement and adventure of the LTCM story. Lowenstein also puts the majesty of financial mathematics into words for us to readily appreciate.

Beyond enjoyment, though, When Genius Failed delivers many takeaways for those intent on being learned financial analysts.

First, those who failed did not do so because they lacked intelligence. Rather, they failed because they thought too highly of themselves and their mathematical insights. They became victims of their own success and projected elevated perceptions onto new, uncharted arenas. Arrogance blinded them to the risks they were entering into. Ergo, even the best of us could benefit from a dose of humility.

Second, experts are fallible and humans are, and perhaps always will be, herd animals. That is why market efficiency is a theoretical ideal and not a reality. An appeal to authority is an established fallacy of logic, but that does not seem to stop anyone from resorting to it, as highlighted by the justifications for COVID-19 dictates. Further, beauty-pageant stocks and alts—those that derive their market price from public popularity and momentum rather than fundamental value—are inherently volatile and unpredictable. Cryptocurrencies fit into this category since few buyers have a clue what they are acquiring.

Finally, the US financial sector is precarious and crying out for decentralization. When Genius Failed conveys how so few players dominate the sector and make it fragile. Regulatory capture, barriers to entry, Federal Reserve meddling, and federal bailouts compound the problem and make more LTCMs inevitable.

The bright spot on the horizon is the rise of decentralized finance or DeFi, which is disrupting established institutions. It has the potential to elevate financial inclusion, undermine policy overreach, and usher in a new era of diversification. DeFi and the Future of Finance (2021) by Campbell Harvey, Ashwin Ramachandran, and Joey Santoro is on my list for review.