What Does It Have to Show after 70 Years? 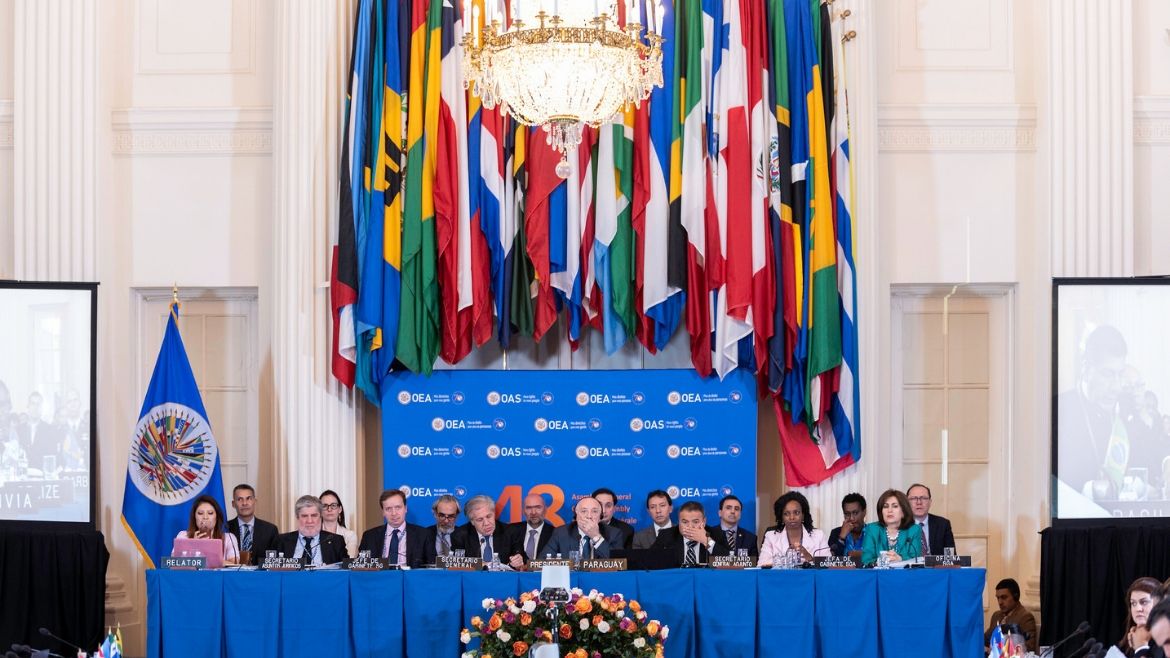 The 48th General Assembly of the Organization of American States took place on June 5. (OAS)

Socioeconomic crises of historic proportions in Nicaragua and Venezuela have repeatedly raised calls for action from the Organization of American States (OAS). The organization, which dates back to 1948, is the most prominent and likely candidate for a unified front.

However, that poses the question: What has been the OAS record thus far? Further, what tools does it have at its disposal to confront anti-democratic and inhumane regimes?

Who funds the OAS? What is its total budget?

The General Assembly of the Organization of American States (OAS) relies on a regular fund by setting country quotas based on each member’s capacity to pay. This regular fund supports the General Secretariat along with OAS programs and initiatives. Countries can make voluntary contributions to the regular fund or specific projects. The United States, for instance, voluntarily contributed an additional $17 million to the 2017 regular fund.

Are some countries behind on payments?

How many people does it employ and where are they all?

The OAS has offices in all member states, except for Canada and Brazil. However, for the locations not listed above the OAS has not assigned representatives at this time.

What has the OAS done to halt the march of 21st-century socialism?

According to Cuban journalist Carlos Alberto Montaner, the United States lost interest in the OAS as the political motivation to halt the expansion of communism in Latin America decreased. The OAS, founded in April 1948, emerged as a Cold War tool.

When Hugo Chávez began implementing his socialist agenda in 1999, Venezuela enjoyed plentiful revenues from her oil-extraction industry. Chávez and his allies promoted Latin-American autonomy from the United States, so they teamed up to confront the “capitalist empire” in diplomatic forums.

For example, Chávez created Petrocaribe in 2005, an oil alliance between Caribbean nations to bankroll like-minded Latin-American governments. The recipients included Ecuador, Nicaragua, Argentina, and El Salvador, and this patronage meant diplomatic allies for Venezuela. With this strategy, Chávez ensured a friendly majority at the OAS General Assembly.

Actions with little or no impact:

After the 2017 Ecuadorian presidential and legislative election, the OAS submitted a report praising the “transparent and correct electoral process” despite fraud complaints from civil-society groups and the opposition party CREO. The exiled Ecuadorian journalist Emilio Palacio and Montaner detailed how the ruling Alianza PAIS party resorted to political manipulation to win the election.

In Honduras, the OAS detected irregularities in the entire electoral process and asked the Supreme Electoral Court to recount 25 percent of the votes. Secretary Almagro said the results were unconvincing and recommended that Honduras repeat the presidential election, which never happened.

On August 9, the OAS announced that the commission, made up of representatives from 12 countries, is suggesting a national dialogue—even though the Catholic church has already attempted this to no avail. Analysts such as Roberto García Moritán, former Argentine deputy minister of foreign affairs, believe this effort will be unsuccessful, since Ortega disapproves of it and the OAS has only a limited diplomatic role.

What is the status of the region’s worst violators of human rights: Cuba, Nicaragua, Venezuela?

In the past two decades, what successes can the OAS claim?

Its most relevant role has been as a mediator in conflicts, but few instances have been successful over the past two decades:

What can the OAS impose on human-rights and democracy violators?

In the worst case-scenario, the OAS can only suspend a member country and indirectly support democratic institutions, calling for the protection of human rights.

The organization’s charter allows only peaceful mechanisms to intervene in conflicts, such as “direct negotiation, good offices, mediation, investigation and conciliation, judicial settlement, arbitration, and those which the parties to the dispute may especially agree upon at any time.”

It shuns other measures such as economic sanctions and military intervention, since it claims these could harm democratic progress and undermine a nation’s sovereignty.

Member nations are supposed to voluntarily incorporate the court’s rulings into their own jurisdictions, since membership makes them binding. However, countries have delayed or modified incorporation and favored their own judicial systems. The IACHR has mainly contributed to the harmonization of member states’ human-rights legislation.

Why did South American nations start UNASUR? Why has UNASUR fallen apart?

One common characteristic of Latin-American leftist governments in recent decades has been a populist rhetoric against “imperialism” or regional US influence. Therefore, the Community of the Latin American and Caribbean States (CELAC) and the Union of South American Nations (UNASUR) were born as alternatives to the OAS.

On December 8, 2004, countries from Mercosur and the Andean Community came together to form an association called the South American Community of Nations (CSN). Its goal was to achieve regional integration and common policies à la the European Union, in contrast to the OAS, whose role is limited to advocating for democracy and human rights.

In 2007, the alliance changed its name to UNASUR and submitted a charter for the organization in 2008. That year, the members elected the body’s first pro-tempore president, Michelle Bachelet. Not until 2011, when Uruguay signed the UNASUR charter, did the organization enter into full force, because all member countries had to ratify the agreement.

CELAC was the brainchild of Brazil’s two-term President Lula da Silva. It was created in 2011 and is a hub for regional dialogue and policy making.

Although it is not an international autonomous organization like UNASUR—it does not have a charter—this coalition was meant to directly rival the OAS.

Many observers regard UNASUR and CELAC as Brazilian diplomatic tools to secure influence in the region. Regardless, both organizations have publicly aligned with progressive and populist left movements.

Paz Gómez
August 23, 2018
Previous
El Salvador Bolsters Central American Customs Union
Next
The Gateway to a Post-Political Age
You might also like
One of the following
April 14, 2022